My thoughts on Puerto Rico 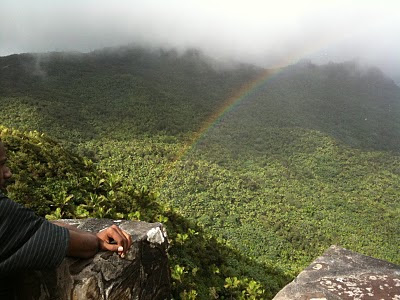 So Ashley and I have been in Puerto Rico for the past few days and return home tomorrow. I'm kind of torn about this place. I really wanted to like it because it's an island that's easily reachable from the east coast and it's in a great climate. Turns out there are many things to like, too. The only rainforest in a US National Forest is El Yunque, and it's less than an hour drive from San Juan, the most english speaking of the Puerto Rican cities. El Yunque is truly a beautiful place, too. The picture above was taken from atop the second highest tower they have there. You have to hike up a very cool trail for about twenty minutes, but it is definitely worth it. A word of advice, though...definitely take rain gear or be prepared to get wet. We didn't get wet, but only because the rain came while we were at the top and we had a dry place to wait it out.

A couple days ago we took a drive from San Juan to the southeast corner of the island. That required a very long drive on a very narrow highway through the mountains. The mountains themselves were quite amazing, with the incredibly large stands of bamboo, some of it more than six inches in diameter and shooting up at least fifty feet. The coastal area was also quite amazing in it's beauty. This island has many rock cliffs to the ocean, but also amazing beaches in between.

The big problem is what the people have done to this place. Almost all buildings are built of concrete and have a flat roof. I'm guessing that's for hurricane protection. But apparently crime is also so bad here that everyone not only has bars on everything, they have tiny (or no) windows and usually concrete and/or steel fences. Many communities are gated with large walls. Even through the mountains, houses are small fortresses. Businesses, too. There's never anywhere reasonable to park, so people just park in the street. And then double park. Oh, and the streets...my my my. Potholes so big I'm sure there were people and cars lost in them. No signs on anything. Road names change on a whim, including major highways (and their numbers!).

There are various groups trying to push tourism in Puerto Rico, but that's a joke. They want tourist dollars, but from what I can see they aren't willing to make any kind of investment to get it. The first "overlook" we saw on the entire trip was inside El Yunque, and even those were a joke. The cabs are stupidly expensive...you're in for $10 minimum, and usually $14-19 for just an average ride of maybe 15 minutes. And good luck finding a cab unless you're at a big hotel. They don't drive around looking for fares...they go park at the nearest hotel and get out of the car and go hang out with the other cabbies somewhere sort of nearby.

Restaurant service? The food is good, but the service is terrible. Only once during the entire stay did we NOT have to ask for drink refills. That was at our own resort, where we did eat several times and did have to ask on every other occasion. And the service in general at the resort was stellar compared to everywhere else we visited. The highlight of our trip had to be eating here: 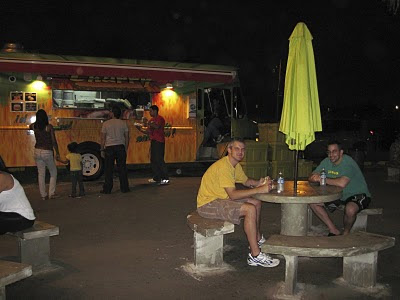 That's El Churry, a food stand in a truck. It was made famous by the TV show Man v. Food. Jonas saw it there and we had to go hit it. They make this churrasca sandwich that's pretty incredible. Just trust me and go get it if you're ever there. Notice you just go order, pay, and they hand you food. No opportunity to screw up the service there! Oh, and you are eating along the main coastal drag, and on a Saturday night that was an event in itself. Saw plenty of Fast-n-Furious wannabes, but the best was when we heard this thumping sound coming. Yes, it was from some major bass in a big stereo. As we looked for the source, we saw a minivan coming...with both front doors open and the driver and passenger BOTH standing in the doorjam (I guess he had the cruise set and was just reaching in for the steering). As we watched them go by in awe, we saw the source of the bass...both rear doors were open, too (held open by something, I'd imagine) and there was a rear wall of speakers pointed out the back. Heck, for all I know the thing was being propelled by the bass.

We even saw two natives go by on a Polaris RAZR. On a public street.

All in all, it's not a bad place. You do have to worry about crime, but it does have amazing weather and some amazing sights. The two forts and Old San Juan are stunning. El Yunque is kind of profound. The coast is beautiful. You just have to be in a little different mindset about some things. People say they drive crazy here. I don't think they drive crazy, but they do have a bit of oddness about how they drive that takes some getting used to. Oh, and the road signs are in Spanish. That's not as big a deal as you might think, though, because they all look like the same signs as the US, so you get used to that quickly. Our fairly new Garmin Nuvi GPS did have the roads, but the names did NOT match up and the GPS was VERY bad at routing via major versus minor roads, unlike in the US.

The biggest drawback? They don't have Mountain Dew here. I never once saw it in any store or at any fountain. Plenty of Pepsi and even 7-Up, though.
at 8:26 PM No comments: