So I have thought in the past some about what "cool" is. At the time the best I could come up with was examples. Like Arthur Fonzarelli from Happy Days:

I was recently reading an interview in Make Magazine with Adam Savage, one of the ever-popular Mythbusters. The interviewer, Paul Spinrad, points out that enthusiasm is the opposite of cool. My first response was "huh?!?" But further explanation and discussion with Adam points out some interesting things. First, it's children that are most often overly enthusiastic. There becomes a point, however, when a more grown up child finds that enthusiasm immature (or perhaps "dorky") and invents (or steals, at this point) "cool" as an alternative. Not caring about what someone else cares about is a way to sort of "take it away."

That's an interesting way to think about it, and kind of useful to me as a parent. Much like anything out there, it's fine to be a little "cool", but it's also easy to go overboard with it. Thinking about it in these terms will help me help my kids better understand why it's bad to act some ways. This could be particularly important for folks with multiple kids with ages that vary widely.

I don't know, just something to think about.
at 8:25 PM No comments:

Go to my new For Sale site and check it out. 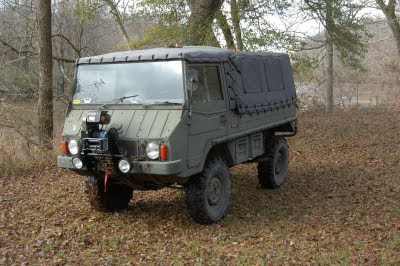 Email ThisBlogThis!Share to TwitterShare to FacebookShare to Pinterest
Labels: for sale

So I just got addicted to Scrabble thanks to my buddy Steve a little over a week ago. Then I found the Scrabble app on Facebook and started playing it today. Then Jane joins and challenges me to a game. First move in that game? Used all seven letters. I'm pretty stoked. It's even better that I got a triple word on top of it. That's Scrabble nirvana. 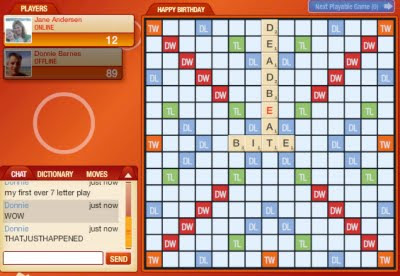 That's right, completely free! The drawback is that only books available in the public domain are available, but there are a lot of them. Many more than you might think with many of them being very good books, too. You can download in almost any format and easily burn an audio CD or put them on your portable music player. Check out LibriVox if you've been looking for this kind of thing for those long car trips.

I'm told some readers aren't so good and some are very good, so if you find a reader you really like you can go back and search for other books done by that particular reader, too. I believe you can also choose to omit bad readers from your searches. And if you like the service and use it, try to give back by signing up to do some reading. It's pretty easy.
at 8:22 PM No comments:

Email ThisBlogThis!Share to TwitterShare to FacebookShare to Pinterest
Labels: recommendations

What's in a wink?

It's an interesting question. What's really in a wink? Love? Lust? Humor? Or just something stuck in your eye?

I don't know why, but I've recently started to use the wink a bit more. Seems a bit of a lost "art." No, not the actual ability to wink, just the actual use of it in social situations. Or maybe it's the people I hang out with, I don't know. I just know that as a kid it seemed like people did it more often than they do now.

Is there some social taboo to it? Can something like a wink be "in" for some time period and then become "out" just the same? I don't recall participating in or overhearing any conversations where anyone talked about the wink as if it were an old style of blue jeans that was no longer in style, but perhaps the wink is like that.

But the question becomes what can one really do with a wink? In my experience, it can be a good way to let someone in on a piece of humor. Particularly tall tales or simple sarcasm. It's worth noting that humor can go over much better in a crowd if just one person gets the joke (or, more importantly, that you're even telling a joke and not attempting badly to be serious). Let that right person in on it with a quick wink, and they pass an infectious laugh around.

Another option is the ability to make someone feel special with a wink. In the above situation, you might do both by winking at the insecure person in the group. Or a younger member. Or an older one. There are also situations where you could just be letting someone in on the fact that you just made a backhanded comment about someone else (but we're not the type to do that, are we?).

I should also mention that a wink can be a good way to let someone else know that you've noticed them. It could be a great way to seize the moment and turn what might have been awkward eye contact into a suggestion that perhaps a conversation might be in order if the other party is willing. People are generally shy by nature, but often it only takes a small signal to get someone else out of their shell. And why not try it? It's certainly easier than striking up the conversation yourself, and definitely easier to write off if the other party doesn't take the bait. I mean none of us like verbal rejection, but failing to respond to your wink is a lot less damaging than "you'll have to excuse me, but I just don't find your lame attempt at a pick-up line very intriguing." I'm sure nobody has ever gotten that exact response, but many have probably gotten that exact vibe after a failed pickup attempt!

Okay, I'm just exploring this "meeting people" thing. I'm happily married and intend to stay that way for a long time. And this is where I should bring up the fact that I can't wink around the house. Why? Because my wife thinks it is funny that she can wink with either eye and I can only wink with one. And she's mean about it and likes to gloat. Okay, that's not true. But she does give me some much-deserved ribbing about it.

So what wink stories do you guys have? Any thoughts on whether the gesture should be used more or less? I can't see what it can hurt to use it more. Sure, it could be very easily overdone, but I'm going to encourage folks to use it in moderation. Why the heck not?
at 2:48 PM 2 comments: