Farewell to a best friend 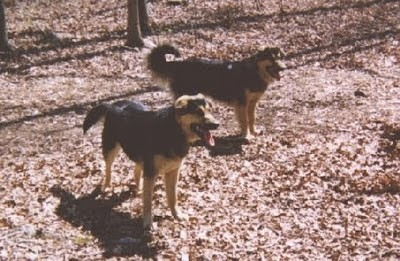 This is a very old picture of Jasper (top) and Clark (bottom). Clark passed away about three years ago, but today we lost Jasper. Both were brothers from the same litter, and we have our good friends the Cosper's to thank for hooking us up with them. Kit's sister, Dee, had a horse farm and a female dog that appeared to be mostly German Shephard that they had adopted (or that had adopted them!). Before they realized she was even old enough to breed, though, she was pregnant.

Ashley and I signed up for our first pet together and waited long enough for them to be weened. When we showed up to pick up Jasper we found that only one sibling remained unclaimed. The folks who had said they wanted him didn't show, and I quickly theorized that having two dogs would mean they would chew on each other rather than our stuff. Ashley agreed, and we took home two puppies instead of one. Both had already been named...Clark got his name because he had a white patch on his chest that Dee's kids thought looked like Superman's symbol. They wanted to name him Superman, but cooler heads prevailed and they were fine naming him Clark, short for Clark Kent. Jasper was named after Dee and Bob's restaurant at the time, Jasper's in Cary.

We loved the names and loved the dogs even more. There are so many wonderful stories of both their lives, from Jasper and his ball chasing antics to Clark and the bullet he carried to a pot bellied pig tormenting them to Clark playing the "mother" to all creatures he loved. Like raising kids, not all the stories were good ones at the time, but they are all now fond memories. We loved them both, and now we will miss them both. In recent years we spoke of Jasper singularly since Clark had to leave first, but now I feel like it's quite appropriate to speak of them together again, since I know in my heart they are together again. I thank God for the 10 years we had Clark and for the almost 14 we had Jasper.

Farewell, doodlebug. Me, Ashley, Kevin, Zach, Sandi, and Hattie will miss you. And a lot of other people.
at 7:12 PM