Anatomy of a perfect day

A perfect day starts with a trip to the North Carolina mountains. Do whatever prayer or sacrifice or other bribe to the weather gods that you have to do so that you get a 75F partly cloudy day. Next, mix in plans for a completely empty day to start with breakfast at the Dan'l Boone Inn with some good friends you haven't seen in a while. From there, plan to take the kids to the park in Blowing Rock, but stop by your respective houses on the way to get appropriate gear for a short hike to a swimming hole. Meet back up at the park.

From there, it gets interesting. First, I decided while at home to add my motorcycle to my "gear." Yeah, I threw my hiking gear in Ashley's car and went my own way on the bike. It's a new-to-me 2009 BMW G650X. For those that don't know bikes, it's a street legal dirt bike that is just perfect for mountain exploration. Anyway, I hadn't actually even had it out on public roads yet (we trailered it up here). So, back to the park...

We let the kids run around and play while the adults did more catching up. Then we loaded back up and headed from downtown Blowing Rock toward Globe. Our intended stop was the China Creek trailhead off of Globe Road. Well, it was our stop, but unfortunately we found that the China Creek trail had been closed by the park service for a year! It's due to reopen in a few weeks, but given the penalty for hiking it was six months in jail, we decided we should head to choice number two, Huntfish Falls. The only reason it was choice number two was that it's a good bit further of a drive, but it's a better swimming hole anyway, so off we went. It's worth noting that I wasn't crying at all, since I got that much more chance to explore the limits of my new bike on twisty dirt roads.

So a short while later we found ourselves at the Huntfish Falls trailhead: 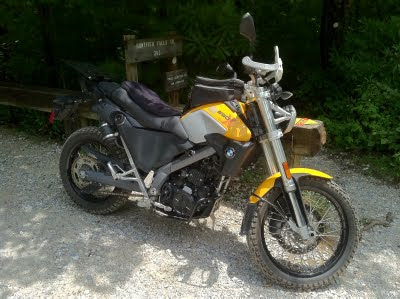 It's six or seven miles of dirt on The Globe Road, and another ten miles or so of dirt between Highway 90 and Pineola Road to get to the Huntfish Falls trailhead, but let me tell you, it's stellar riding. Particularly today and particularly for someone on this kind of bike that's new to them. Why? Because it rained a good bit yesterday. I had every surface type imaginable to play on. Loose gravel, occasional large rocks, that really awesome tacky clay, soft mud, and occasional soup. Sometimes you even had weird mixes of those. And yet I never over-stepped the limits of this fine machine. I am impressed, and I am looking forward to a lot more seat time on this thing. Back to the day...

The family and friends caught up, and we headed down the nearly-a-mile-long trail that's pretty much straight down. It lands right at a very awesome set of waterfalls with a large swimming hole that leads to a pretty decent sliding rock (at least for small kids). The best part? There's a pretty decent rock ledge about five or six feet above the water that you can jump off of and into about five foot deep water (so you have to be careful to only cannonball, but it's still great). The water temperature is quite brisk, but you do get used to it quickly. Or at least I get used to it quickly, anyway, but maybe that's because I get addicted to that ledge jump. I think I did it ten times today. Both kids did it, too, and even one of our friends, who apparently had never done anything like that!

After an hour or two or three (who keeps track of time in a place that wonderful?), we headed back out. The hike back up isn't so wonderful, but it's tolerable enough. We grabbed some snacks and headed back toward civilization with a plan to meet at the friend's house to grill some supper. Notice we had missed lunch, but between the awesome breakfast and the snacks, I don't think anyone cared. I left first on the motorcycle...hehehehe.

I did some more limit-seeking along the ten or so miles of gravel road back to the Parkway, where I started to notice gray skies. Uh-oh, might get wet! And sure enough, as I rode the Parkway back to the house, there were occasional showers. Never enough to soak the road, but just enough you knew it was raining and not drizzling. I didn't much care as it was just warm enough it was no bother, and I was still damp from my swimming excursion anyway. I got home, showered, watched the US lose the World Cup, and we headed back out for our supper engagement.

We found our friend's fairly-new-to-them house with no problem, and enjoyed a great meal and conversation. They have a wonderful place that I'm sure they will enjoy for many years to come. They even busted out some sparklers that had been intended for July 4 festivities, but were rained out. Much to my surprise, my children had yet to experience the wonder that is dazzling fire on a stick that you can hold in your hand, so much fun was had by all. Sadly, the sun decided that it was time to end the festivities, and we called it an evening. But it was quite a nice way to cap what was a perfect day.
at 10:11 PM