Zero To Rollers In About Five MInutes 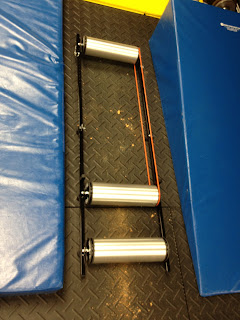 For those unfamiliar, what you see here is a set of bicycle rollers.  You put the back wheel of the bicycle between those two rollers close together, and the front wheel will sit on top of the other one.  When you pedal, the back tire spins both the rear rollers, and the middle one has a belt that connects it to the front roller.  So your rear wheel spins the roller that drives the belt that spins the front roller and thus spins your front wheel.

So what's the point?  Training.  Unlike a traditional "trainer" that you mount the rear of a bike in with a resistance unit spinning against the rear wheel, on rollers you're actually balancing yourself constantly.  It's a much more active exercise for the body than just the spinning motion of a trainer.  It also forces one to work on pedal smoothness.  Ultimately, I'm told a rider with a lot of roller experience can ride on these with no hands and never move.

That's ultimately, though.  To start with, one has to learn to ride on rollers at all.  It turns out it isn't very hard to do, it's just hard to convince yourself you can do it.   And I've heard all kinds of stories about funny crashes and such, though I'm told the worry about crashing is overblown.  The thing about rollers is while it feels like you're moving (and can feel like you're moving fast), in reality you aren't.  So a "crash" is really just a "fall over sideways with your legs spinning."  So the key is to not worry about crashing.

Easier said than done.  So as you'll see in the video below, I put big foam crash mats beside me.  I wasn't worried enough to buy these, but I had them sitting around.  The double bonus here is that they effectively raise the floor beside the rollers a good bit.  That's nice because these rollers are about five inches above the floor and thus stepping on and off is a bit of a pain without some sort of aid.  But as you can see in the video, it wasn't that bad thanks to how thick the pads are.

Also, I want to give a shout-out to Victor.  He convinced me to try rollers, all the while scaring the heck out of me when I saw his rollers.  They are the same as mine except they are only 10 inches wide instead of 15 inches like these.  I still don't know how the heck he rides those!  Aside from convincing me to try rollers, he also built both my road bikes and some of my mountain bike wheels (look him up at his company website, Bicycle Lab).

Now, if you've read this far, you have intestinal fortitude that's off-the-charts.  That's good, because this might be the most boring video in the history of man.  This is video of my first time ever on rollers.  By the end I was to the point I could ride about as long as I wanted to without flying off.  Enjoy!

Rollers are great for indoor riding in the winter. I actually use them with my folding bike, so when I'm done, I can slide all my equipment away into the closet. I don't have mats like you, but I haven't wiped out yet either.