As of a few days ago, today's schedule was supposed to go something like this:
Today's first unexpected joy was snow.  All day.  It was mixed with rain and just a tad too warm to really accumulate (it would for a while, then go away), but snow is cool and sometimes those flakes were huge. 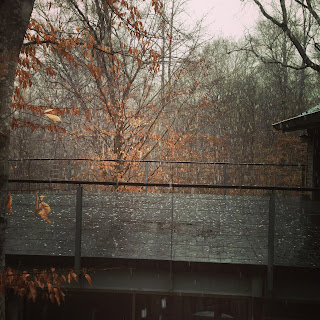 Snow led to the second unexpected joy, and that was the cancellation of Zach and Kevin's basketball games.  See, I don't enjoy coaching.  I really don't care for picture day, in particular, because it takes an hour game and makes it an hour-forty-five affair of aggravation.  On top of that, we only had an hour between games and the game sites were 20+ minutes apart, which meant we'd have to eat in the car and likely be a little late.  So it's like a day off work.

The cancellation of those basketball games led to the third unexpected joy, and that was that I got to go to the UNC versus Virginia basketball game.  Due to the fact that Zach and Kevin's games overlapped that game, I had let my parents use all four seats, and they already had invited Dad's cousin Phil who was bringing a friend (from all the way in West Jefferson!).  But me and the boys decided to go anyway and scalp tickets.  Fortunately I have the Sprinter van, too, so we were able to all still ride together and use the good parking pass.

Having to scalp tickets led to the fourth unexpected joy.  I know this seems unlikely, but it's awesome.  While I've always been willing to use scalpers if I have to, the reality is I hate doing it.  It's a dirty, opportunistic business.  Anyway, I passed on a good set of three tickets at $90 each (face value was $50) and kept looking.  Then a guy approached me and said he had two tickets.  I asked where and how much and he replied they were front row of section 210, which is upstairs but the front row.  210 is also side-court.  So they are very good seats.  And he said we could have them as he was just planning to "look for a Dad" and let him have them.  He and his daughter were using his other two seats.  I said we'd take them and if the boys had to sit without me we could make that work.  So I then bought another seat for face value from a scalper in the upper deck and we headed in.

[ As a sidenote here, I was definitely a beneficiary of the pay-it-forward line of thinking.  Dad and I used to buy tickets from scalpers quite a bit back in the 90's for UNC basketball games, but one day a nice man gave us two tickets provided we were "going to use them."  You see, he had given tickets away before only to watch the guy he gave them to sell them.  So we said absolutely, we weren't scalpers and would go in with him.  Since then, I've always done the same thing when I've had spare tickets before games.  And I never charge my friends or family for tickets.  While I could certainly have afforded to buy tickets today, it was nice having a fellow father help me out. ]

I had hoped that some of the people that sat around my normal seats wouldn't show, as is often the case for games in bad weather.  But today was kind of a big game for UNC and the fans really came out in force.  It was a great crowd.  So before the game we headed up to take the boys to their seats and most of that entire area was empty, including the row of four seats behind them.  So I decided to sit there, especially upon hearing those folks didn't show up pretty often.  And they didn't, which was today's unexpected joy number five.  I did pay face value ($50) for the ticket I used to get in, but I ended up able to sit with my boys in much better seats.

The UNC baseball game was cancelled completely due to the weather, which wasn't an unexpected joy at all.  But I had decided last night that I needed the sleep more than I needed to see the baseball game and planned to run after the kid's basketball games.  But that plan still worked as there was plenty of time after the UNC basketball game.  But it was still snowing and right around 32F.  Cold and wet.  The ground was very wet.  But you know what?  It was a great run.  Running in the snow is an unexpected joy all by itself, so that's unexpected joy number six.  I should note that I considered a treadmill run (which I haven't done in nearly two years), but my coach subtly reminded me that it really wouldn't be that bad.  And it wasn't.

I was worried about exactly what to wear during the run.  I ended up with compression shorts, running shorts over those, a long sleeve Smartwool shirt, a dry fit long sleeve running top, a fleece zip up vest, thin running gloves, an ear covering headband, Smartwool socks, and trail shoes.  So I was bare legged.  And I ended up pretty much perfect...I did need to unzip the fleece vest most of the way, and I contemplated removing the gloves a couple times, but I was basically comfortable.  I was pretty much soaked when I got back, but still warm.  Nothing would have stopped me from being soaked by then even if I had a water barrier on as I would have simply been sweating inside it anyway.  So it was great.

And then there was supper.  Originally we were going out, but Ashley realized she had all the fixings for homemade chilibeans.  That was unexpected joy number seven, as that's better to me than anything we would have eaten out.  Combine that with the comfort potatoes that Alisa made for me in exchange for letting her take an extra half day off to extend her weekend a little, and supper was fantastic.  (And another note here...she didn't have to make me those potatoes.  I really just sort of begged my way into them.  They were appreciated, but she would have gotten that half day off just for being the world's most awesome assistant anyway.  Don't tell her, though.  I'm probably not giving anything away, as she doesn't read my blog.  Or by the time she does, it'll be a month later.  Time heals all compliments, or something like that.)

So that's one day with seven unexpected joys and the only cost was missing the UNC baseball game and missing dinner with the Kimels.  So if we play the plus-minus game, we're still at a solid plus-five for the day.  You simply can't beat that.  Oh, UNC did beat Virginia, but in fairness to my Unexpected-Joy-O-Meter, I really did expect to win that game.  Some would say I shouldn't have, but I did.  And I'm still happy and a little bit relieved that they did, but I can't claim it for the UJOM.  Getting to be there for it was important more than just for the game, though, because I also live for moments like today's half time festivities...you see, they officially honored the hanging of Tyler Zeller's jersey in the rafters.  He was also given the Patterson award before the game, and Lennie Rosenbluth and Tyler Hansbrough were also given special recognition today.  Being there for those things is just as important to me as seeing another win.

Love days like this! and thanks for sharing your assistant with us; we're loving every minute. :)