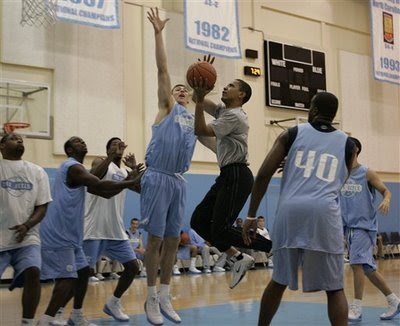 So what happens now for Obama? I mean in the time between getting elected and taking office. It's kind of a long time when you think about it. I know he's got a lot to do what with appointing a staff and such, but how and where does he do all that from? I'd guess his secret service protection is stepped up, but is he just going to be around the house working from some office he already had? Or is there some "president elect" space somewhere? And we know the White House is pretty much furnished, so what does he do with his own house and "stuff"? Do you just pack your clothes and leave it like it is for four (or eight) years? We know you can have pets at the White House (hopefully the security deposit is high)...does he have pets? If not, will he get a dog or maybe a cat? If he does, will that animal have its own secret service agent?

And on the secret service, just how does that work? I know they can't tell me, but I still wonder...how are they staffed? Is there two months where the current president (or POTUS as is so en vogue to call him now) just gets sort of half his normal security? Or do they bring in some secret service agents from some temp secret service agency? Surely in DC there's like some temp firm you just call when you need large bald men (bald because they obviously shaved it, not because they lost their hair) in dark suits and earpieces with several large hidden guns.

Will Obama be allowed to play basketball now? And if so, who does he play with? I mean I'm sure he had some group of buddies that played with him before, but do those guys now get to play with the POTUS? Or does he have to make the bald dudes in the suits drop a couple of their weapons and get their sweat on? Or does he just call up Michael Jordan and say "hey, MJ, this POTUS...Air Force One is in your area, wanna hop on and meet me for some one on one?" I'll bet MJ would go just so he could say "I schooled the POTUS." Well, I've seen POTUS-elect play and I could school him, too, so maybe he wouldn't.
at 8:33 AM

well, i don't know the answer to most of the questions but i do know that they're going to have a dog. he said it in his speech last night that his girls will now get their puppy that they deserve. and i picture he'll keep his house. and also, i toured the clinton library here and they have a mock clinton oval office and they actually change out a lot of the furnishings and decor and stuff according to what they like. so it looks different with each president.

I'm also interested in what happens to his bro-in-law, Michelle's brother who recently got hired as the head coach for Oregon State. Does he need secret service now too? And I just feel really bad for those little girls having to leave behind their friends and schools in Chicago and go grow up in the White House. What a drag. Even if they do get a puppy. It doesn't seem worth it to me to put young daughters through that.

Once on The West Wing, President Bartlet and some peeps snuck out late at night to play hoops on Pennsylvania Avenue. The fake POTUS got Juwan Howard on his team, but I'm suggesting it might be better to get one of those in your photo.