Don't you blow in that dog's face! 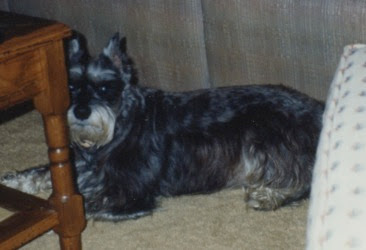 Hanging out at Alan and Jane's house the other night and playing with their lab, Kiwi, reminded me of a story. My Dad is gonna hate me for this, but we've told it plenty of times already, so here goes...

A good many years ago now, my Dad bought my Stepmom a miniature schnauzer named Truman. He's pictured here. He was one of the coolest dogs ever, but died a few years ago. He lived a full and happy life. We all miss that one.

He was a puppy was when I was still in high school. I used to do crazy and annoying things when playing with him, like putting one end of one of his toys in my mouth and letting him get ahold of it. We'd then play tug of war. Yeah, gross. Anyway, another thing I would do was to blow in his face. Just a quick puff. He's snap at you. I was pretty quick, though, and he never got me. But for some reason, Dad hated me doing that. Any time I did it with him around he'd yell at me..."stop that, don't blow in that dog's face, he's gonna bite you!" And if I didn't listen I'd get in trouble. But I'd do it occasionally anyway and he'd admonish me.

Our living room couch was very long. It was the couch that got me addicted to long couches, in fact. I could lay down on it in between the armrests fully stretched out comfortably. And so could Dad. That particular couch was also somewhat low.

One day my Stepmom and I were both in the living room and Dad was laying on the couch. On his stomach. With his head turned out to the room. Truman came into the room and around the corner of the couch. For reasons we've never quite determined, a very odd thing happened. As Truman went by Dad's face, Dad blew. A nice little puff. Problem is, when you're laying like this, well, you have no real recourse to move quickly. And Truman snapped. And Dad couldn't move. So Truman bit him with those tiny sharp puppy teeth...RIGHT ON THE NOSE. Dad let out a pretty good yelp, Truman bounded backwards, and Cathie and I absolutely lost it. Yes, my Dad can have a bit of a temper, but this was too much. We were both in tears laughing. Dad was in tears of both pain and embarrassment. I think we must have laughed for a full minute. As we got our breath, Cathie couldn't help it...she just said "Ronnie, you shouldn't blow in that dog's face." And we lost it again, though this time I could swear Dad smiled. Just a little.
at 2:40 PM

great story. and good someone that has had a mini schnauzer. i'm not a dog lover (must run in the family :) and t grew up w a dog so i took one of those online quizzes to see what dog i would like and a mini schnauzer was in the list. but we didn't know anyone who had a mini. only problem: cb might blow in its face once in awhile :)