Where will we find our music?

I know, that's a strange question. But here we find ourselves in the iPod age and I have to wonder where we'll find new music. In the old days we relied on the radio to find our new music for us. I even remember shows every Tuesday night at 8pm where they'd play a couple new tracks from different albums and let you vote on which was better and such. DJs told us about the new bands and about changes in band members and when bands broke up. But now as more and more people get iPods and put their music collections on them, where will they find new music?

Oh, don't say iTunes. I just can't fathom a world where Apple's suggestions actually let you find new music you love. Sure, you can sample the new songs from the bands you already know, but past that I've never sat there just trying random artists I've never heard of. I'm sure some people do, but not most. Maybe they ultimately do come up with ways this can work, but for now no amount of "artificial intelligence" can do a good job of recommending music for me. My own assistant, who is pretty good at knowing what I like and don't like about most things, stays pretty befuddled by my music tastes.

Okay, the next way is social networking. Almost everyone is on Facebook or MySpace or Twitter and we all like to "tweet" about what we like, so maybe you hear from your friends who have similar tastes to yours. And then there's the first person, where we're riding in the car together and all listening to only one iPod. Okay, I get that, but it's still not terribly common to do that, I don't think.

You can still listen to the radio, but as has been pointed out by Jane on her blog, the radio can just plain

suck. It's always seemed bad in the Triangle area of NC for some reason to me, and that's funny that I agree with Jane on that because I don't think she and I have much in common when it comes to music taste at all. And others who moved here from other areas seem to have the same opinion of the general state of radio in the Triangle. Why is that? I've been here for fifteen years now (oh...my...GOD!) and it's been that way the entire time.

Another old-fashioned method of finding new music is going to listen to bands at local clubs. But that's more a young person type thing to do. While popular and covering much of the music buying public, it still doesn't reach the vast majority of folks out there, I don't think.

So these days I find I listen to a LOT more satellite radio. I've got it in most of the vehicles I

drive with any regularity and find I quite enjoy it. I can always find something I like one one of the "standby" type stations (80's, 90's, oldies, current country, etc), and when I want to branch out there are several good opportunities for that, too. For the last couple of years this has been my best way to find new music to add to my collection. But is it working for others? The subscription numbers and the fact that had XM and Sirius not been allowed to merge would have likely sent both into bankruptcy seem to indicate it's not catching on very well. So this one isn't helping the masses, at least not yet.

But maybe more people do have good local radio than not. Maybe those of us who don't were driven to the other alternatives and are doing quite well. Maybe the sum total of these methods is still better than back when it was all just AM radio or, uh, before radio at all (duh) and there is no problem whatsoever. I don't know. I just know it seems more difficult for me to find new music that I like these days. Seems like when I put the effort in I find it, so it's not a lack of music options. Maybe I'm just lazier. Or maybe I'm just pickier. 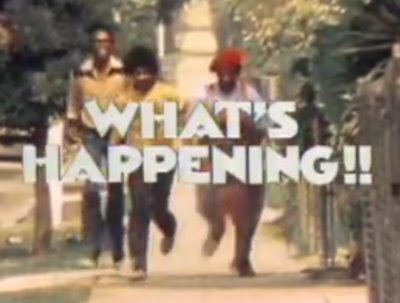 episode of the old sitcom called What's Happening that's always stuck out in my mind. I don't remember the exact context, but the regular cast members (all high-school students) were talking to a football player who couldn't read and trying to figure out how he was passing his classes. They ascertained that one of his classes was "music appreciation." They asked what he did in that class. He said "well, they play me some music and I say 'I appreciate that!'" I often feel like I'd fail that class, because it might be too difficult for the teacher to find music that I appreciate. *cough*

At any rate, I suppose my point here is a general question more than any good point. How do you find your new music? I also wonder if there are people out there that don't care if they find new music or not. Do you get old and set in your ways such that you've heard all the new music you want to hear and will now just settle in with your collection and call it quits outside of that? Would it be okay if I did that? I sort of hope not, in one way, but in another, maybe that would be fine. Or do most people have no urge to find new music and just let it find them? Or do most people enjoy the hunt more than I do and find that all these new tools really make their lives easier, even if they spend more time doing it?

Man, I'm full of questions on this topic. I should have been in bed 45 minutes ago. But instead I was watching What's Happening minisodes on YouTube. *sigh*
at 11:48 PM

A lot of my friends use Pandora, which I don't love because you have a finite number of skips per hour and I'm impatient, but it has a decent system for recommending things you like. Then they share with me, etc. It works well when your group has similar music tastes.

And yes, your musical tastes are an enigma wrapped in a mystery.

I don't like Pandora, because it just makes everything blur into one sound. I like a big mixture of all kinds of crazy things. I find music from friends, from the radio (in Chapel Hill I would listen to the college radio stations, not the corporate ones, and here I listen to NPR on Saturdays when they feature interviews with musicians), and podcasts of All Songs Considered. Also I scan the papers to see who's playing and what the reviewers say about them. If they sound interesting I'll look them up on itunes or playlist.com. And sometimes I'll buy a music magazine just to hear what's going on out there, like Paste or American Songwriter. Then, there's songs you hear on tv shows, or in movies, or commercials that catch your ear and you go look it up. I don't think there's any problem with finding music these days, and I'm pretty picky about what I listen to. But good music is all around.

I think I'm just too lazy somehow. *sigh* But I think I found a new artist in this youtube video:

And the video is amazing, too.

It has been on my mind for a while now, how it's so difficult to discover new music without the caliber of radio stations I was used to in San Francisco (and I've been here 10 years). There have been more times than not that I scroll throught the radio stations and never hear ANYTHING post 1995 or so. Scott suggested the UNC station (ok, I could never find it). It is almost driving me to satellite radio, which I swore I would never consider.
Come to think of it, I'm not really sure WHAT type of music you like, Donnie. Would guess 80's rock, but Alan said country. Seems like there's a lot of both of those around here :)
All in all, I feel your pain but have had a lot less inclination to worry about it(until now, of course).

Cool video! Band of Horses is awesome. You should definitely like them.