Why am I working out so much (or so hard)? 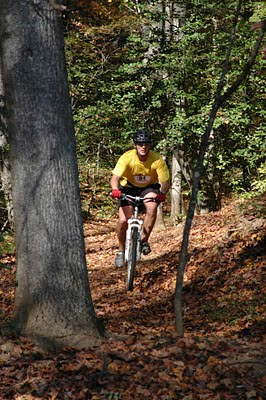 For the last 9 years I've worked out with a professional strength trainer. At times it's been as many as five days per week, but for most of it I'd say the average was three times per week. Otherwise I was occasionally mountain biking and playing basketball. I've gotten a lot stronger and more explosive in that time, and both sports have seen the benefit of it. But a few months ago I dropped back to two days per week of strength training and added a professional endurance training coach to also get me running and biking more. How much? Three days of running and three days of biking. Each per week. And I take one day off completely, so that means two days a week I'm doing both strength along with running or biking. Oh, but there's more...I recently started a church basketball league, so while that's going on I also have two days a week where I'm playing basketball along with the running or biking.

So, why am I working out so much (or so hard)? I get this question a lot. Often times it really means different things. Sometimes it is literal because the person asking it doesn't know I play basketball and wonders what I'm training for. Sometimes it's more philosophical because they know I have a goal or two but they wonder why I have those goals. Sometimes it's something in between, I think. And sometimes the question comes with an incredulous tone...like "why would anyone want to do that?!?" That's the one I least understand because that one has some strange caring undertone. Like I'm crazy and they are concerned for me, which I find odd. There are plenty of people out there who are truly obsessed with training, and believe me, I'm not even near THAT scale.

At any rate, I do have some real goals. First, well, I want to live longer and be more healthy. Strength training alone won't do that. Second, I love playing basketball and want to remain good at it (and even continue to improve) for quite some time. Third, I want to be a much better mountain biker (I want to ride for longer periods, I want to conquer bigger hills and obstacles, and I want to enjoy killer days that much more by being ready for them). Last, I want to try to see if I can do triathlons.

Whoa, what? Triathlons? Those are a big deal. What's up with that? Well, I've done a couple now that were "adventure" triathlons, which meant they were kayak paddling, mountain biking, and trail running. Unfortunately, those are hard to find. What there are a good many of, however, is XTERRA triathlons, which are open water swimming, mountain biking, and trail running. I used to run cross country and track in high school, though for a time I was a self proclaimed "hater" of running. Probably because at some point (ie. most of my life) I was really bad at it.

The bigger problem, though, is that swimming thing. Now, don't get me wrong, I can swim. I have no problems jumping in a big bad lake from my boat and swimming around after my kids. But I've never done any kind of endurance swimming, and the few times I've tried to do it, I've failed miserably. And I'd say at some point I considered myself a "swimming hater", too.

So what the heck am I doing considering triathlons if I "hate" 2/3 of the sports? Well, that's just it. I don't really hate them. In fact, I'm finally starting to enjoy running some. Probably because it doesn't make me feel like I want to vomit and/or shoot myself for 95% of the time I'm doing it. I think I would hate it if I were trying to do it all on the road, but since I can do most of it on trail, well, I like it more. My mind stays engaged the entire time and can't wander to thoughts of being bored or how much something "hurts" or whatever. You have to watch out so you don't trip or break your ankle or whatever. There are surface changes to contend with, slippery roots, and the occasional snake who doesn't appreciate being awakened from his nap.

I'm just getting started with the swimming thing, but I'm treating it like some foreign task I've never done before and want to be really good at. I'm getting top notch coaching and trying to pretend that, other than being able to save my life if I screw up by using my instinctive swimming ability, I've never done this before. It's a completely new challenge in a completely new environment. It's giving me the opportunity to meet some new and interesting people, and honestly, I've found that a coach/athlete relationship is kind of awesome when the athlete is completely willing to throw themselves into what they're doing and the coach is doing what they love doing. It's a perfect mix, because both parties are going to see serious results.

My biking and my running have improved by a lot in four short months. I've got a little over three months to get my swimming passable before my first XTERRA triathlon. Now, I've got no real goal about how I finish. I have no idea what to expect, honestly. But I do have a friend who will be doing the event with me who has not only done a good many XTERRA events, but has done very well in them. So I don't have much to worry about with how the event itself will go. Sure, I'll make some transition mistakes and maybe worse, but the first event will be all about seeing what they are all about, learning how things go, and getting a good taste of it all. Will I do more? I have no idea. I'd say the chances are good, but I have to get better into this swimming thing first. I believe I can, though, and I know I have some GREAT coaches around me. I not only enjoy seeing my results, but I enjoy making them proud, too. I don't know why, but that part is something that helps me, too.

What else is there? Mountain bike races. Trail running races. And, not to be forgotten, the Krispy Kreme Challenge! Four miles broken up half way with a required consumption of a full DOZEN glazed hunks of awesome. Go big or go home, I always say! I am not ruling out an occasional traditional triathlon, though I don't generally enjoy road riding and find road running a little harder on my surgically repaired knees. But sprint triathlons may be an option as I do have a nice road bike on the way from Victor at The Bicycle Lab. It seems a waste to only use that bike for a trainer and two weeks at the beach (where there is no mountain biking, but there is a really great highway for road biking fairly safely).

The last reason for all this? Curiosity. I'm genuinely curious how far I can push things and how well I can do as a result. That's certainly only a small part, but it's also something out there. The handful of races I have done reminded me of something I had forgotten from my days of high school cross country: I race way better than I train. I think back then I thought that was just because I didn't like to train and was lazy. But now that I'm not so lazy, I find that I still race better than I train. I wonder if I'll find a point where that's no longer true, or I wonder if there's something inside me that will always let me beat anyone who I'm still near as a race nears its end. Competing in bigger and bigger races will answer that. Might as well go find out...
at 8:20 PM

It is so cool that your boys are watching you and Ashley work out and push yourselves to reach a fitness goal. They will just see exercising as a part of a healthy life, and they are so much more apt to become active adults. The end result is four healthy and fit Barnses!

impressive. Jeff is scared to death of the swimming part of a triathlon too. I must say it is a strange part of it--especially the very beginning of the swimming leg, as people are kicking your face in a lake (that was my experience anyway) but there is nothing like the finish line. I hope do another triathlon someday--just a sprint--perhaps in a couple more years after this last and final baby is born and my body is my own again.