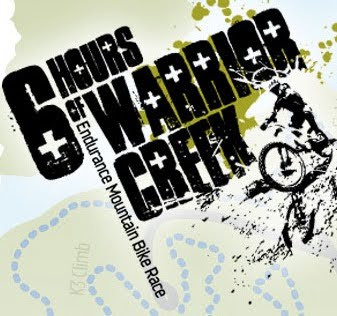 Well, I've been training for it for a while now, and today we headed to North Wilkesboro for the 6 Hours of Warrior Creek. My friends Alan, Bob, Michael, and Tom all shared a pit space, and Reid and I partnered up to do the race as a team (the rest of the guys went solo). The way the race works is there is a 13 mile loop and you complete as many laps as you can complete before the 5.5 hour cut-off when you can start one more (which also must be finished in under seven full hours). The first lap is 13 miles but has nearly a mile of pavement first to help string the field out, but all the rest of the laps are trail only.

If the mile of pavement was supposed to string us out, I can't imagine what would have happened without it. The big problem was the area got a reasonable amount of rain overnight, so as soon as people hit the trail, it was stop and roll city for several full minutes thanks to soupy mud. Things settled out to where you could ride finally, and then it was just sloppy and nasty and crazy. There were steep hill sections where one person would spin out and cause a huge pile-up behind of riders who had to walk because once you lost your momentum, there was no re-starting in the soup. Some spots were so slick you couldn't walk your bike up without being VERY careful. I saw several walkers fall, not to mention a bunch of riders falling here and there. Heck, I had to slalom a few downed folks once.

One problem I found was a little too much of a willingness to just ride behind people that I would catch rather than bothering to try to pass. Passing on these courses is kind of bad as it is, and in this soup it could be downright dangerous. But I still could have been a good bit more aggressive in going around people instead of settling for their speed instead of mine, and I worked on that later. But this first lap was more about survival, and survive I did. It was pretty slow at 1:26 (I had done an "easy" ride about 10 days before that was 1:21), but I had no crashes and only had to walk up maybe two very slick hills. Tom apparently did a 1:08 on the first lap, but that was in huge part thanks to lining up on the front row (I was a minute back in the pack) and doing a huge sprint on the start to be up with the experts when he hit the trail. So no big traffic, and he's just fast. Alan was second out of our group at about 1:25, I was third, and Michael was right behind me (I actually didn't pass him until the last climb when he had a minor fall in a slick spot). Bob was a good ways back, but he hasn't been able to train like he would have liked and riding solo was really just taking it easy.

I passed off the team duties to Reid, and he went out and did about a 1:30 lap. That was pretty good given his level of training (and bike choice, which was a little bit limiting), and apparently the mud did a LOT of drying during his lap. In fact, I chose ten minutes before the start of the race to switch from my 29" bike with fast rolling but small knobby tires to my 6" travel full suspension bike that had big knobbies on it. Excellent choice given the slop (I knew it had rained, but I thought it was just a small amount that wouldn't affect the awesome clay at Warrior Creek...thankfully I came to my senses!). But what I didn't know was how well it dried...so I went back out on the same bike. Bad move. That bike is heavier and robs a lot more power via the rear suspension, and my 29" bike is a hard tail. And has fast rolling tires. And the course was now just good and tacky, which would have been perfect. Oh well, didn't cost but maybe a couple minutes, I'd guess.

The second lap for me (and third for the team) started out kind of weird. Even though I trained a few times by doing hard rides, taking a long break, and going hard again (thanks coach!, I wouldn't have done that without you and it would have been worse), it still took a mile or so to get back in the flow. But when I did, wow did it feel good. Unfortunately, I didn't keep myself in check and I really started flying. I was passing aggressively (but nicely!) and really rolling well. But I sort of just blew out early thanks to that...I was at the six mile marker in just 35 minutes, but died on the second half. I could have done a third lap thanks to the break, but it wouldn't have been much fun.

I got back in and handed it over to Reid (just in front of Alan!), and he did great for about four miles, but then he blew out, too. His final lap was right around two full hours, and we missed the cut-off to start a fifth lap. I really feel like we would have made that if the conditions would have been perfect from the start, but that first mud lap really sapped the energy and killed my time (I was hoping to be under 1:10), and I think Reid's first lap (even though it was drying up) did the same to him.

My real goal, having never done anything like this before, was to simply have fun for the entire ride. Unfortunately, it was all but impossible to enjoy that first lap, but even so I didn't hate it, either. I sort of felt like it was kind of neutral, which was kind of a mental achievement in itself. If you had told me the course was going to be that muddy I might not have raced at all, but having done it I don't think I'd shy away next time if I really felt like it was going to dry out like it did. The second lap was one I really did enjoy, with the only exception being most of the climbs on the last half of it (which aren't terrible, honestly, so it's not like they ruined my fun or anything). It was a lot of fun stepping up the aggression level and having it pay off in terms of passing, too. My big fear in doing that is always that you over-do it and pass someone that's just in a little rest zone or something and then you have to let them go by you when you die on a climb, but that never happened. Which makes sense as once people are that spread out on a course, if you catch them, you ARE faster than they are. And as a team rider, there were a LOT of solo riders who were kind of starting to die pretty hard on their third lap (to my second!). So I got to do a lot of passing.

One of my bigger fears about mountain bike racing from the beginning was passing. By design most of these trails are fairly narrow, and since you're racing you'd think it would be hard to pass. But racers generally have a lot of respect for one another and if you catch someone they will often OFFER you a place to pass. And even if they don't, all you have to do is "claim" a pass by letting the rider know which side you intend to pass on (verbally....a simple "pass on the right") and they will almost always not only move over, but slow a bit to let you get it done easily. It helps to pick your passing spots well, too, so it doesn't slow the other rider much, or simply make sure you have the legs to BLAST by. I really like that part of this sport. I'm sure once you get to the top levels and you're nearing the end of a big race, the etiquette dries up a little, but that's to be expected.

Anyway, we completed four laps and had fun. Tom completed four and barely missed the cut-off to do another (thanks to a heinous flat tire early in the race that cost him 20 minutes!), and Alan was second in the group with four as well but right at six hours. Michael did three in under the cut-off, but chose to stop there thanks to some big cramping issues. Bob did three in just under six hours and was really happy with that. The laps were almost exactly 13 measured miles, but the berms and switchbacks always fool the GPS into thinking it's shorter and show only 11 miles or so. You can see my data from the ride here.

So, long day, but a lot of fun. I'm a little bewildered that my power average was only about 25W higher than where I have been training, but honestly I did go 26 miles. That is further than I typically ride, too, by a decent amount, so going longer and a significant amount harder is still a nice accomplishment. I have no idea how we finished relative to everyone else, and don't care too much, either. I'll look at the results whenever they get them available online, but for now I'm just gonna recover (plug!) and look forward to more riding and more fun and getting even better.
at 7:16 PM

Email ThisBlogThis!Share to TwitterShare to FacebookShare to Pinterest
Labels: sports