Just read this article about crashing while road cycling and the mental effects it can have.

I'm twisted, but I kind of had to chuckle a bit. No, not at her pain, but at the exploration of this phenomenon and the somewhat obvious conclusions. Well, obvious to me. But then I realized why it seemed obvious.

I have a lot of experience crashing.

Now, let me start out by saying while I do have a lot of experience crashing, I actually have yet to crash while road cycling (though I'm sure it will happen...and the article just reaffirmed that quite nicely). So what is this experience I am speaking of?

I have vivid and very complete memory of my first bicycle crash that resulted in an injury of significance. I was in the fifth grade and was riding the badass black Schwinn Stingray that my Dad basically built for me. I don't know of any surviving pictures of that bike, but it looked a lot like this: 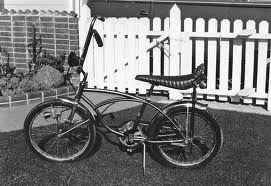 I remember it like it was yesterday. I was making a left turn off of a sidewalk at my school onto a dirt trail. Somehow the front tire caught a big rock that was semi-embedded in the trail and just sort of threw the bike sideways and me onto the ground. Unfortunately, my left knee hit right on top of another jagged rock and cut it open pretty good. I think that was the first time I ever got cut open like that, and it scared me. Big time. I screamed and screamed as I rode furiously home. Blood had run down my leg and stained my sock. I'm sure I scared my Mom half to death, too.

Now, I was a kid then, so there was no thought of not riding again. But of course, it's not the same. I think the problem is I learned pretty quickly that if I was going to have much fun on this earth, well, I was going to have to take a few chances. And occasionally, or maybe not-so-occasionally, those chances were going to cause me to crash. It's always just seemed part of having fun to me.

Fast forward through a lot of dumb kid stuff. What else have I crashed? Mountain bikes. Heh, that's so often the stories aren't even interesting any more. But in every one of them I'm like the guy in the Times article I linked above who crashed on ice and realized it was his own dumb fault. I'm the one piloting that bike and choosing to do it where and how I do it, and when I crash, no matter how "out of my control" it is, well, it's my fault. No doubt about it.

Race cars? Yep, more than a few times. At triple digit speeds. First big crash was just a rookie mistake, honestly. I took a corner faster than I thought was going to work (it would have worked if I had trusted myself) and then did a classic panic for a half second. Blam, I went sideways at 60MPH+ into a wall. Minor concussion, lots of bent metal, but I was able to race the next day (thanks to Reid, the best crew chief ever). I'm sure at the time I wasn't so quick to just blame myself, but nobody else hit me, there was nothing slick on the track, and I just made a mistake. So deep down I knew it was just something I did wrong.

The last big race car crash? I made a TINY mistake and just did a little half-spin with two wheels off the track...I'm not even sure I ever came to a complete stop, in fact. I kept going around that corner and down a LONG straightaway where I built speed to over 115MPH while catching another race car. I pulled out to pass by braking later than he did. Oops, no brakes. Five presses later (sometimes after going off track you can experience what we call "pad knock-back", which means you get one press with no brakes, then they come back) and some major league awesome driving to NOT hit that car I was passing, I was leaving the pavement and done for. My last ditch effort after making sure I cleared that other car was to attempt to point the car in a direction that would have been a hell of a downhill ride and would have missed that first wall, but all I was able to do was get it turned a little. As soon as I left the pavement it spun quickly and slammed the wall at almost exactly 100MPH (we have it on data). Another minor concussion, a lot more bent metal. That car does race now, but it wasn't racing the next day, that's for sure.

I lost brakes because I hit something in that little spin that resulted in the two wheels off track and bounced up and cut the brake line. Never knew it. Was that "my fault"? Was that "fair"? It was absolutely my fault, and absolutely "fair." Always check your brakes. And I shouldn't have made that mistake to begin with.

I've crashed bicycles, motorcycles, race cars, street cars, gokarts, golf carts, and probably a lawn mower or two. I've crashed while skiing, tubing, sledding, and even while just chasing my child around the house (that one resulted in 12 staples in my scalp a mere 36 hours before getting on a plane to Hawaii!). Heck, just the other day I fell YET AGAIN while running. I decided to run down a huge log skinny feature that we built for mountain biking. I've done it before, but never when it was wet. I knew it would be a little slick and was prepared for it. Almost. It was way slicker than I thought possible. First step went out from under me and I went straight down on my butt and hands. And slid like I was on a sliding board. For a while. Ouch.

I could go on (and probably have gone on too long already), but I just couldn't help but chuckle at the analysis and publishing that came from one bicycle crash. One could say that perhaps most people are more skilled than me at what they do and don't have my vast experience to draw from. I'd buy that. I just found it funny that I live so far on the other end of the spectrum and yet can't recall ever having a "I'm never going to do this activity again" kind of moment. But I always try to make sure I learn how to "never have this particular accident again." A more interesting article, to me, would have been a slant on turning the "I'm never riding again" reaction into "learn from your actual mistake and move on" kind of thing. Because there were several things you could change...don't mix with slower (or unknown) riders, don't draft quite so close, pay more attention to your surroundings than your data (NOTE TO SELF HERE!), etc.

One thing I do know, injuries suck. But making them worse with knee-jerk reactions to them doesn't help. Learn from it and move on.
at 8:49 PM