Sometimes you have to just follow the wisdom of the greatest marketing guys ever and Just Do It (I've actually met the marketing duo that came up with this campaign for Nike...very interesting guys and a story worthy of blogging in a few more years, I think).  That's what I did today, anyway.  What do I mean?  Well, today was long ride day.  That meant a 5.5 hour mountain bike ride.  It's also unseasonably warm and the high was supposed to be in the mid-80s.  The combination didn't seem like a great one, so I decided I should get up early and get this one done before it got hot.

But yeah, getting 5.5 hours in before it gets hot is hard.  That means starting in the dark, so that's what I did.  I've got a kick-ass headlamp that I've never used, so I busted it out.  Besides, Umstead isn't very hard to follow, and that's my preferred long ride kind of place since it's the closest kind of terrain we have to what I'll see in Leadville.  Okay, it's not close in terms of terrain at all, but it's close in terms of the kind of speed I'll be doing, which is good enough.

Normally I sort of look forward to long ride day, but I was fretting this one a little bit.  I did a mountain bike race on Saturday and then another fairly hard road ride on Sunday, so it  hasn't been a full week since I stressed my riding legs pretty hard.  On top of that, I had an aborted run on Monday due to not feeling well, and my run yesterday wasn't all that fun, either.  And two weight room sessions in between.  And then I had to set the alarm for 4:45am to get the kind of start I needed.  Combine all that and you have a lot of reasons to whine (and I usually only need one, and if I can't find that I'll make one up).

Set alarm, get up, get going.  That's what it takes.  It's pretty simple, really.  But that doesn't mean your body is going to cooperate when you get there, and there were times early in the ride that mine felt like it wanted to revolt.  But it wasn't a serious revolution, and everything worked itself out.  I have a little course I like to ride out there that's a little over 16 miles, so I rode it four times.  Now, the first time was mostly in the dark, so that one was a little slower than usual.  But the next one was kind of fast.  And when I came in even quicker on the third one, I knew I should see if I could make the fourth my fastest.  That would bring me in at right around five hours even and leave me with thirty more minutes to do, so I couldn't just blow everything out. 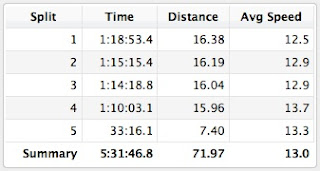 I came a little close to over-doing it, but I didn't.  I did get my fastest split, though, which meant I got faster for five straight hours, which is pretty cool.  Then I took it easier on the last part, but still wasn't really slow, either.  And with all that, I got my longest distance on a bicycle ever at 72 miles, as well as my fastest average speed for a long ride at 13.0MPH.  That's the first time I've had a long negative-split like that, too, so there were a lot of firsts today.