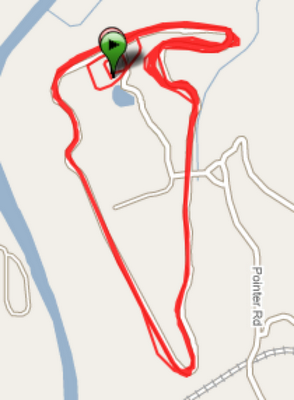 So, I wore my Garmin 405 GPS and heart rate data logger during a session at the race track today. What's interesting is we did a "mock" race start during this session and I don't see any extra spike thanks to it. But my heart rate is in the 140's on average for the driving portion (had to start the data pretty early before even getting in the car and getting belted up).

That's actually a little higher than I thought it would be. Given the temperatures we see inside the car, it's easy to see why race car driving should be considered a sport. I can't sustain that kind of heart rate while paddling a kayak! Anyway, check out the data. I'm curious what others think. The dip at the end in speed to zero was a pit stop to change the rear wing angle on the car and then we went back out to see what effect it had.

That totally trumps my DisneyWorld data.