Every day is an adventure here in Colorado

I set my alarm clock to go ahead and get up and get my 1.5 hour ride in while it was cooler.  Got up at 7, got my breakfast smoothie made, ate, got dressed, and went out and loaded up my bicycle on the back of my motorcycle.  I didn't take a picture of that today, but here's an older one: 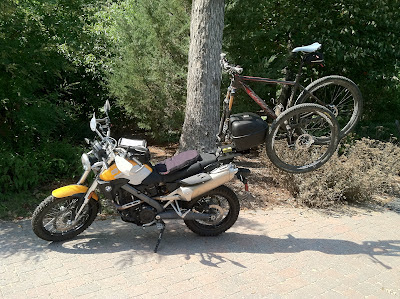 I rode out of town, found a good spot to park, and jumped on the bike to get another ride on the St. Kevin's climb.  Did that part of the race course and doubled back on the road and finished up right on time.  Loaded up and headed back to the campground.  While I was gone, Matt had gotten some breakfast, gone for a little exploratory motorcycle ride, and returned with some groceries while I was in the shower.  When I got out of the shower, he helped me with a couple of nagging plumbing issues we had with the RV, then we geared up and decided to go do some exploring.

Ashley had bought a couple of great books on Colorado off-road trails, and we used Colorado Backroads & 4-Wheel-Drive Trails.  In it, we found that a nice loop looked to be to take the Mosquito Pass over to Fairplay and down and back across on Weston Pass.  Mosquito was labeled "moderate" with Weston labeled as "easy."  Hmm, alrighty then!

We set off and pretty quickly found ourselves on a dirt road through abandoned mine country.  We passed a large area of parked SUV's with ATV trailers and kept going.  Soon the road turned to large loose rocks and not much more than what you'd call "trail."  And it started going WAY up.  And things started looking like this:

And a while later, we made it to the summit:

That was seriously some of the most intense, crazy, scary riding I've ever done.  Until we started going DOWN.  Oh my.  That was worse.  Way worse.  Oh, I forgot one interesting thing...there was a Jeep at the top with HAM radio antennas all over it.  At first I just assumed it was some dude monkeying around with talking to really far away places by getting his antenna REALLY high.  But no, it was a dude and his wife and they were volunteering doing communication work for the burro races.

Wait, the WHAT?!?  That's right, the burro races.  Turns out this weekend is Burro Days in Fairplay, CO.  So we were informed that if we were to see any burros (that would presumably have people with them), it would be appreciated if we would just pull to the side and stop and turn off our engines and let them pass.  Both Matt and I assumed these burros would have riders.  Mmmmkay, so we head down, trying not to fall off a bazillion foot cliff while navigating motorcycles on steep, twisty, rocky, loose "roads."  Oh, and keeping our eyes out for the burros.

We go a pretty good ways without incident and without seeing any burros and reach a point where it appears the road gets much better and there's an abandoned mine and a couple cars parked.  We stop to take a break, because both our necks and shoulders and backs were getting quite tired of all this work.  Okay, it's not hard work, but when you're that stressed about it, it's bad.  We find that one of the groups is another set of HAM operators helping with the burro races.  I quickly noticed they had a cooler and it was quite large.  And we were parched.  I asked if they'd be so kind as to sell us a couple bottles of water, but they were quite friendly and gave us each a bottle.  So we sucked those down and got ready to mount up.  In smalltalk with those folks, I mentioned I was glad it looked like we had the worst of the road behind us.  "Oh, well, there's one more pretty bad spot on down.  Be careful."  Oh great.

Turns out his idea of a bad spot and ours were way different.  It really wasn't much of a big deal and soon we found ourselves on a long stretch of normal gravel road.  And then it happened.  Burros!  But apparently these aren't racers because they're just walking the burros.  We crawl past them and give them plenty of room, only to see they have race numbers on the burros.  And each burro had a pack  on its back with a gold mining pan, shovel, and various other things that appeared to be "spec."  Matt commented at one brief spot in between burros that he wanted to tell one of them to "get your ass out of the road."  But I think he knew that wouldn't come across quite right from out from under a motorcycle helmet, since he was only kidding.  We had nowhere to be, and well, how often do you get to see a real live burro race anyway?

We made our way through that and to the highway and turned toward Fairplay.  Wow, Burro Days are huge.  Took a while to get through town and to the other side where we stopped at a store to top off our fuel tanks, hit the restrooms, and get a snack.  Then we made our plan to head further south and go back across the much easier Weston Pass.  And it was easier, with parts of it simply "unmaintained for low clearance vehicles."  So it was very rough and rocky, but never particularly steep.  At one stop, however, minor disaster.  Matt shook my bike's rack and it moved.  A lot.  No, I wasn't carrying a bicycle, but I did have the top box on it there.

One bolt was missing, and one bolt (caddy-corner from the missing one) was sheared off.  It and it's bushing were still there, though, and we realized that the rear pair (of which this was one) were longer than the front.  This meant that this bolt would work in place of the missing one on the front.  So we figured three were better than two and should get us home, right?  WRONG.  Not long after, that bolt sheared off, too.  Now, I had next to nothing in my top box, so it wasn't overweight or anything.  But the vibration just killed it.  So we had to stop again and remove it completely and strap it to Matt's rack.  Fortunately we had enough stuff to do that securely.

So it would seem that bike rack and top box are a bit too much weight, particularly as far back as they have to be mounted to work, on the rough trails.  That's not a huge problem because they aren't hard to take off for that kind of thing, it was just tough finding it out like this.  I need to procure a few parts, but I think I can get it back together by Tuesday.  I was a bit bugged to find that in the bouncing around it also broke my rear tail light, but then I remembered that I had a tail light upgrade that I had yet to install, and I brought it with me!  Talk about luck.  Even when I have bad luck, things have seemed to work out okay.  *knock knock knock*

So we made it back, and remember when I said Matt bought groceries? 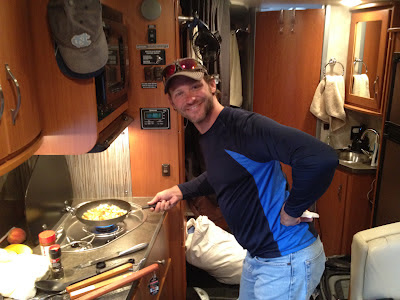 Well, he got steaks and he not only grilled them, he made potatoes and even got a fresh cantaloupe and cut that up for us to eat.  I knew I brought that boy for a reason!  And we did all of that before 6:30pm.  Good thing, too, because he had to finish cooking in a bit of rain as it was!  But the skies have cleared up and our bellies are full and we're ready for another day of adventure tomorrow.
at 9:26 PM