We slept in a bit today, and then got to work on the motorcycle problems that lingered from yesterday.  I started doing some more work on the bike while Matt was kind enough to run to the hardware store for some tools and some supplies.  He found almost everything we needed except for one spacer (and to his credit, he did find a spacer that would have probably done okay, but I wanted better).  As we looked around for possible other solutions for a spacer, we found a spoke weight from his bike that was no longer being used.  It was the right outside diameter and the right length, but needed a bigger hole in the middle.  While we discussed how to make that happen, Matt noticed a "machine shop" within walking distance of the RV!  So $5 later, including tip, we had the spacer we needed.

After some reassembly, it started to rain.  We had just finished, but had to rush to get the tools put away.  For the next few hours, it rained on and off.  I decided that it would make sense to go try to do my 45 minute easy recovery spin on the trainer in the trailer while the weather was bad, but then I hit a snag.  The Computrainer can't fit a 29" tired mountain bike.  I had no idea, and that's the only bike size I brought.  Oops.  Fortunately, the rain stopped long enough to get the ride in on the road around town with only minor occasional sprinkles.

Oh!  Before that, Matt and I went to do some shopping.  First up was Alco, where we procured a few random items as well as a shower rod and shower curtain.  No, we did not need one for the shower in the RV, but instead for the middle of the RV.  You see, the RV bathroom is so small that it's nearly impossible to put on clothes after you get out of the shower.  So with this, we can just open the door to the bathroom and come all the way out, yet still have some privacy: 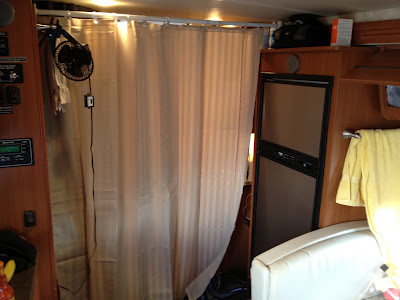 Next up was the grocery store.  We now have a bulging refrigerator again, along with leftover burgers and mac and cheese: 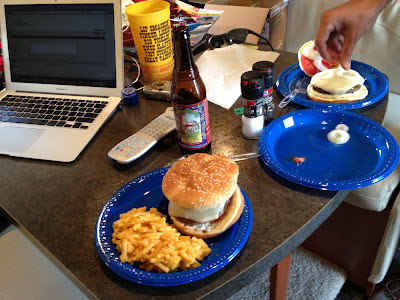 That's right, Matt did it again on the grill.  That was a KILLER burger.  And Sage said "eat a lot of red meat", so I've still got that going.  She said have more beer, too, so hellllloooooo Fat Tire!  That came from shopping stop number three, the local beer/liquor store, which has a really nice selection.  It's handy that Matt's motorcycle has so much luggage on it...we put a lot of food and beverage in there at one time.  And I really should have had Matt get a picture of me carrying a shower rod while riding a motorcyle...can you say "jousting"?  But hey, we got it done.  Since then it's been nothing but Olympics on TV (including women's beach volleyball!) and some more Fat Tire and chips and salsa.  I know, life is hard, right?!?
at 11:34 PM