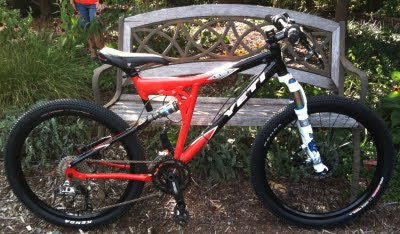 So for no apparent reason I bought this Yeti frame and rear fork from my friend, Troy. It was brand new, but a 1999 model and size small. My plan was to build a basic cheap bike for myself that I could throw in my race trailer and take to races and have something to ride around in the paddock (my current dedicated mountain bikes are just too expensive to be doing that with). I built the bike, but then had a better idea...

I bought my seven year old son a Specialized kids mountain bike about a year ago. It's okay for what you pay for it, but that's about it. It has a front suspension fork, six rear gears, and twenty inch tires. You can get some parts, but many items, like the six speed rear derailleur, just don't seem to be easily available to a do-it-yourselfer. But I got to looking at my son's long legs and this small frame and started thinking...

Step one was to see if the Fox front fork I had could be shortened in a non-destructive manner (ie. it could be put back to normal length for cheap). I had heard they could, and an email to the guys at Suspension Experts in Asheville confirmed I was right. I sent the fork to them, and as usual, they got it taken care of and back to me in short order. Next was to switch it to 24" wheels. Turns out a good many trials riders are going to 24" wheels on this type of bike, so it was easy to find a set of rims and have a set of full wheels custom built for under $300 from Universal Cycles. I placed my order online for some Atomlab rims, Shimano XT hubs, and DT Swiss spokes built up and ready to go. Got them from Portland about nine business days later. Not bad.

So the combination of removing two inches from the front fork and going to 24" wheels dropped the entire bike down about two full inches. I ordered a cheap seat post that I cut down myself since the seat post would interfere with the rear suspension otherwise. Then I moved the seat all the way forward in the mount. Next I narrowed the handlebar by 3/4" on each side and I installed it as low as I could on the front fork, but I left about an inch on top of the fork using spacers so it can be raised later in life.

So I put it all together this way to find a problem. With everything as small as it would go, my son's legs were fully extended at the bottom of the pedal stroke. No good. Besides that, 175mm cranks were going to be fairly close to the ground with all this lowering, particularly if I set the suspension up with much give for him. It's still got around three inches of rear travel and three inches of front travel, and I wanted him to be able to use it. He could get on and off the bike somewhat awkwardly, but it seemed like that was just a "getting used to it" thing.

So I decided to have my friend, and very talented welder, Bill Flynn shorten the cranks. The cranks on the bike he was riding were just over five inches and these were a full seven. So I had him take an inch and a quarter out of them. Now the fit is perfect with him still having a reasonable amount of knee bend. And the best part? The bike can grow a LOT as he does. He will probably ride this same bike for a LONG time since everything other than custom built wheels is an off the shelf part I can easily get.

Now, I did have to do some weirdness to get brakes on this particular bike. Seems the newer Fox forks don't support V-brakes, so it had to be disk. That's easy, I chose a disk mount front hub and put a Magura front brake on. Why Magura? Because the back was tricky. It had V-brake mounts, but that just ain't my style. It also had the old-school "parallel" disk mount. Nobody makes brakes to mount to that any more, but there's still an adapter you can get to put IS style brakes on a parallel mount. The big problem with that is parallel style brakes sit inside the triangle, and many calipers on the market are two big. But I found that if you find one with the piston in the middle of the assembly and you go to a 185mm disk and IS adapter, you can make it fit and work like a charm. Adjustment is a little harder to get right with these adapters, but it can be done. Magura had a brake with the caliper configured right, so that's the brand that won by default.

Otherwise the bike is built with fairly standard parts. That Rock Shox SID rear shock is the same basic shock that they STILL sell to this day. I had to send it to Suspension Experts and have the old-school custom valves that they used to use changed out for Shraeder valves, but otherwise it's stock. The cranks are just relatively cheap Truvativ cranks and chainrings. It's got a SRAM rear derailleur and SRAM shifters, but a Shimano front derailleur since it has a TINY mounting post for that derailleur and Shimano was the only company with spacers small enough. Hmm, or maybe I put a SRAM derailleur on with the Shimano spacers. I don't remember now.

Kenda makes their new microblock tires in 24", so he's sporting the same tread pattern that a lot of my friends hit the trail with. One of the coolest parts is that I pretty much had to figure out what products would work and what wouldn't (with a little trial and error, but nothing too bad, thankfully) and put it all together. I learned a lot, and the kid has one of the coolest bikes any seven year old ever sported.

As he grows into it we'll convert it back to normal cranks and adjust the seat. Then eventually we'll put the front fork back to five inches and maybe move the handlebar up. And we can go back to 26" wheels and tires really easily, too. Or maybe he'll get to move up to another bike and the four year old will get the step up. Either way, it's been a fun project that I think he really appreciates.
at 11:39 PM

Last night, both Kevin and Zach came running up the steps to the barn apartment. Hilary!! Hilary!!! I thought for sure something had happened. I opened the door and they both shouted, "you HAVE to come see our NEW BIKES!!!"

I definitely think they are both excited.