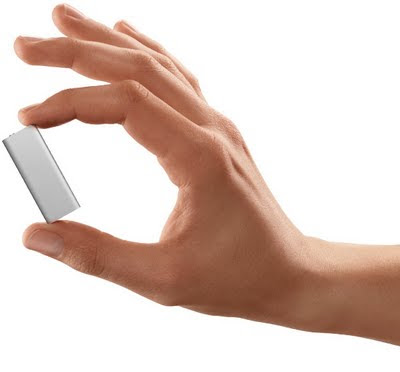 So a lot of companies, including Nike, have fitness headphones and earphones for the iPod. So far, however, nobody but Apple has any with the controls built in (please send me links to other products if I'm wrong!). That's only important for users of the newest iPod Shuffle, because it only has a power switch. Everything else is controlled by the little "stick" on the right earphone cable, which basically has three squeeze buttons. That keeps the unit tiny and easy to pack away somewhere, as well as making it really easy to control while running or biking or whatever.

The problem with the Apple ones is that sweat can render the control useless until it dries back out. The other problem is that they don't like to stay in your ears (and Apple only has in-ear earphones, I believe). The ones that come with the iPod go in your ear, but not really into the canal. They won't stay in during exercise, in my experience. The higher end Apple earphones actually extend into the ear canal and come with three different sized cups. They work fine for a lot of stuff, and might work well for the right sized ears during exercise. For me, however, they wouldn't stay in while running or biking.

I decided to take matters into my own hands and customize mine. I took a set of real earplugs (the kind that you squeeze with your fingers and stick in your ears where they expand to fit) and cut them to about the same length as the cups that came with the earphones. Then I used a soldering iron with a fine tip and melted a hole through the center. Careful here as supposedly the fumes from this kind of foam can be very toxic! Some trial and error and one wasted set of earphones (they're cheap in bulk!) got me a set that would stay on the earphones very well and also stay inside my ears just about no matter what I do. They also cancel ambient noise VERY well. That's great for airplanes and such, but BE VERY CAREFUL using something like this for exercise. I wouldn't use these if you run or bike on a road. I only use mine on trail and on a very tiny private road, and even then I'm VERY careful. You really can't hear anything else.

The problem with sweat was significant, too. There are probably a lot of different ways to solve this one, but the one I chose was to cut some clear plastic from a ziploc baggy and wrap around the button "stick." I made the plastic about an inch longer than the stick so it went a half inch on each end. Then I used some 3/8" dental rubber bands to go around each end to seal it up (thanks for the rubber bands, Shelley!). Seemed to solve the problem fine, and I can still use the buttons while running and biking. You can see everything below. 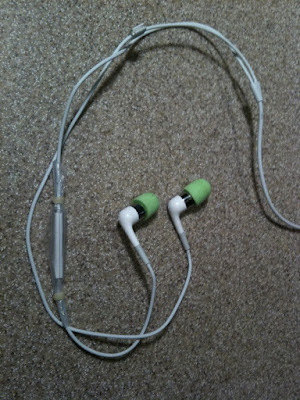 Email ThisBlogThis!Share to TwitterShare to FacebookShare to Pinterest
Labels: gadgets

So when I read the word " I used a soldering iron" my first thought was that you have WAY too much time on your hands :). After reconsidering, I realize that the phrase "necessity is the mother of invention" is most appropriate here.
I have a similar problem. Angie has some foam covers she uses...was thinking about trying those (instead of using my soldering iron as I think it's broken).

Hey -- where's my thanks??? You wouldn't have gotten the ziploc thingie on without me.....