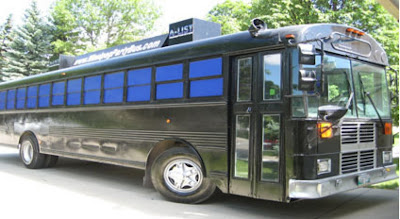 We at the DBaT offices are unsurprised that such a creation exists, but we have never spent one single minute inside a moving "dance" club. Not one. *cough* This seller claims some lofty prices for what they have invested in this little beast, but we're unimpressed with the painted windows and the general appearance. And I suppose the idea is to be too distracted by "the show" to care that those seats look pretty darned uncomfortable. And there can't be many states where it's legal to be selling alcohol for consumption inside something like this, can there? And where does the "dancer" go when the show is over? And where do the patrons go to relieve themselves? Do you just have the driver make regular stops at McDonalds? We want more details on how this business venture can work! Or, uh, no we don't. But we do want to make sure you get to see the video of the cool light show inside this thing:

And if you're so inclined to get more info, you can just head on over here and place your bid now!

Email ThisBlogThis!Share to TwitterShare to FacebookShare to Pinterest
Labels: dbat