Just another day in ... Colorado

So today's workout was to climb Powerline again.  Yay, me!  Or, you know, not.  It's just a few miles, but it's also 1,400' of elevation gain over some of the worst terrain imaginable...huge ruts, loose sandy soil, large loose rocks, etc.  I tried to park a few miles away so I could warm up first, but I came in from the wrong direction for that as there was just nowhere I felt like I could leave my motorcycle safely.  So I parked near the bottom and just took off cold.

Wow, that stunk.  Cold starts at high altitude with large workloads are tough.  But it's not long on the Powerline climb before us mere mortals have to walk no matter what, anyway, so it wasn't too horrible of a situation.  Then it levels out to merely a horrible climb so I started pedaling.  I made it up in about ten minutes less than the first time I did it, so I'm pretty happy with that.  Here's a self-portrait of me at the top: 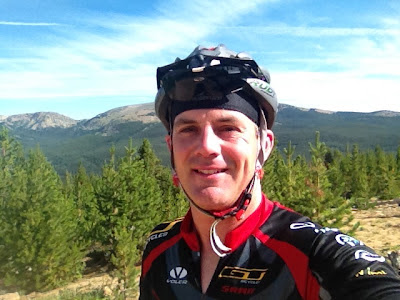 Then it was time to descend.  The descent is pretty dangerous on Powerline if you aren't careful.  I've been wearing sunglasses for most of my riding out here because the course is so open for the most part and the sun is pretty tough.  And I really prefer to have glasses of SOME kind on when I'm riding for the safety...it's no fun getting bugs or dirt in your eyes when you really need to see!  So I had sunglasses on even though part of this descent is in a wooded area, which meant shadows made things tough to see.  And I missed a rock that was ill-placed such that it somehow took out my rear brake disk.  I didn't crash nor even come close to it, but the best effort I could make to fix what was basically a brake disk in the shape of a taco meant that I got the rear wheel rolling again, but I had no rear brake at all.  Here's a picture of the scrapes on the disk, and trust me, it's very bent: 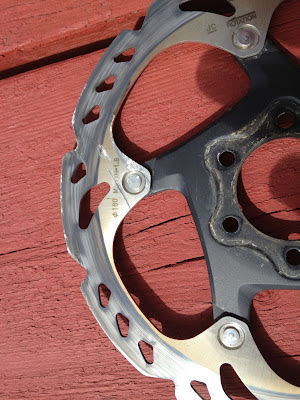 Now, everyone knows you do most of your braking with the front brake, but on a descent like this, particularly with someone as heavy as me, it's very important to be able to use both.  Since I couldn't, I decided to stop a couple times on the way down to cool the front brake.  Having it go out on me during this descent could be devastating, so I chose to take no chances here.  But I got through it, and got the disk swapped and things appear fine otherwise with the bike, so no worries.  I will probably switch to clear glasses for the rest of my training and the race, though.  It's just what I'm used to.

Later, Matt and I decided to do some motorcycle riding.  First we hit a local trail for some exploration that didn't take long and ended without much interesting to find, and then headed out to ride up Columbine Mine, the biggest climb of my mountain bike race.  It takes you to 12,600' and above tree line, and weather was great this afternoon, so it was a very good ride up.  Here's a picture of us and our bikes and some amazing background scenery: 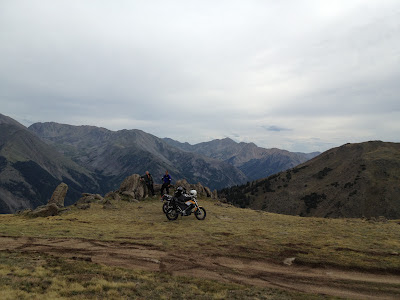 It was kind of cold up top, so we didn't stick around long.  I need to check the data, but I'm pretty sure I can descend that mountain faster on my bicycle than I can on the motorcycle.  Of course, it's no contest the other way!

We headed back to town and walked over to watch some of the Leadville Boom Days! festivities.  I'm not sure how much of an overriding theme there is, but it's a crazy mix of interesting things culminating in, of all things, burro races on Sunday.  Tonight was some slow motorcycle competition stuff in the street.  What we got to see was a competition they call the "weiner bite."  That's where you have a guy driving a motorcycle with a girl on the back.  They go really slow under a hot dog hanging from a string.  The girl has to bite off as much of the hot dog as she can, but not swallow it.  Then she spits it out and they measure who bit off the most of the hot dog and that's the winner.

Yeah, that was amazing stuff, let me tell you.  But there were a ton of fair food vendors and we had some great "ribbon fries" and brisket.  Sadly, they don't allow open container alcohol even for Boom Days, so I had a sweet tea and we called it a night.  I woke up at 5am and couldn't go back to sleep this morning, so that was plenty of day for me anyway.
at 10:59 PM