Never take two days off from Colorado adventure. Ever.

Because if you do, apparently Colorado tries to get you back for it in one shot.

The day started off innocently enough...I got up early, made my smoothie, got dressed for a three hour ride, and loaded up the motorcycle and headed over to Twin Lakes, the site of the 40 and 60 mile aid stations in the race.   It's both, because when you leave you climb ten miles to the top of Columbine Mine, and then you turn around and do the course backwards from there.

The ride was fairly uneventful.  I'm happy with my performance capability, and learned a couple things.  You can see the data here.  I was even able to find someone to take a picture of me at the top:


So that was all good.  Got back to the RV with a couple sprinkles on me on the way, got a shower, and Matt and I headed to Wild Bill's for some burgers and a shake.  As we walked back, we could see the skies just didn't look good, and not long after sitting down, it started to rain.  Matt was bummed because he really wanted to motorcycle ride, but I was kind of okay with it since I really just wanted to rest my legs.

So we watched Olympics until about 3pm when it was no longer raining and Matt was itching to ride.  The skies still didn't look great in pretty much any direction, but I went along anyway.  Mistake, mistake, mistake.  Matt wanted to go across Independence Pass to Aspen, so we headed that way.  That takes you right by Twin Lakes, and I stopped briefly to consider riding to the top of Columbine just to show him the turnaround.  But it was definitely raining on top of the mountain and not in the direction we were headed toward Aspen, so we went on.  And Indpendence Pass was beautiful and amazing pavement up and over the Continental Divide.  Here are a few pics from the overlook at the top: 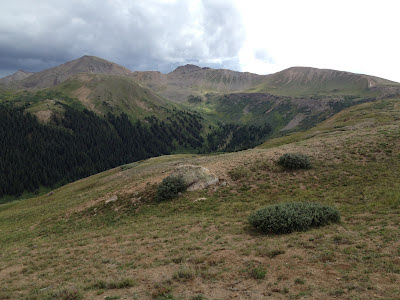 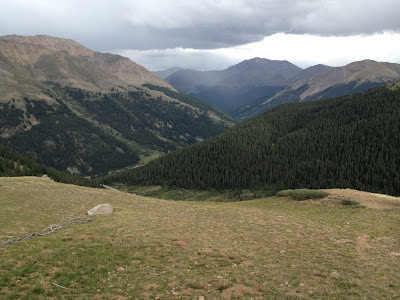 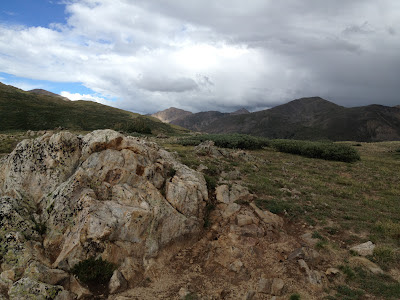 That's all from 12,095 feet, which is just above the tree line here.  There were tons of people up there, all apparently from Aspen, because they were in shorts and t-shirts and were shivering.  I'd guess it was about 50F there (which is way colder than it was at the top of Columbine Mine, which is 12,600 feet...strange).  But I was wearing jeans, boots, t-shirt, and had my good Aerostich suit on over that, which has waterproof pants, waterproof shell, and a good thick fleece liner.  So I was fine.  In fact, I had the vents open on my coat while riding to cool off just a little.

Then we headed on into Aspen, where we found a cute little town with a lot of traffic.  As we were stopped at a stoplight we decided neither of us was terribly hungry at that point, so we kept riding.  It was about 5:15, so we had been riding two hours at this point.  I had no idea what he was thinking in terms of how we'd continue on, I was just following him.  We kept going through Aspen and out of town on highway 82, and he finally stopped about 15 miles out of town at a store.  There he informed me we were headed toward Hagerman Pass to return.

Now, part of Hagerman Pass is part of the LT100 race course, and we had actually ridden from Leadville out Hagerman Pass a few miles just a few days ago before turning around because it was getting late.  Everything we saw of Hagerman Pass was a nicely groomed gravel road, so that seemed fine to me.  The weather was cloudy but didn't look threatening.  So we headed on down through the town of Basalt, and out on Frying Pan Road.  This road parallels a very pretty river that had fly fishermen everywhere.  And it kept going and going and going.  But I didn't mind...it was great riding.  Few cars and lots of curves.  Doesn't get much better than that!

We finally reached Ivanhoe Creek Road.  That was what Frying Pan Road turned into when it turned to gravel.  I had assumed we'd reach Hagerman Pass, not something else, but there was a "Utility Construction Ahead - Expect Heavy Delays" sign here.  And there had been one of those on the other end of Hagerman Pass.  So we figured this must be the right way.  I wasn't worried about the construction, though, as it was after hours now.

We rode and rode and rode.  This gravel road was fairly well groomed, but went downhill slowly the further we got until it was pretty much one lane with blind curves and some bumpy sections.  It started to rain just a little and I signaled to Matt to pull over.  We pulled over and used my GPS to make sure we were going the right way, and we were.  But the rain was getting harder, and the sun was going away.  And we had a long way to go.  At this point, turning around would have meant a LONG ride on pavement back around.  Probably a full 100 miles, in fact.  And it looked like we were definitely less than 20 miles this direction.  So we soldiered on.

And the road got worse.  And the rain got worse.  And the road got worse.  And then it started to hail.  And then we even got to a water crossing.  Impossible to tell quite how deep, but there was a short spot to cross it that couldn't be too deep.  My fear was that it would be a very soft bottom.  So what do you do?  Gun it.  And it was fine.  But at this point, it's getting cold, too. Very cold.  And now the rain was so significant that every pothole was filled with water.  And my gloves were not waterproof, and on this bike my seating position doesn't let my pants stay over my boots, so my feet were getting soaked, too.  The rest of me was dry, thankfully.

But at low speed I couldn't close my visor because it would fog immediately.  So I had to keep it open and just let the cold rain and occasional hail hit my face.  It did act as enough of a visor to mostly keep it out of my eyes, at least.  And now we were going vertical...straight up.  Through rivers of water running down.  Over huge loose rocks.  With huge cliffs sometimes on both sides of this one lane road.  And then we reached a sign...we were crossing the Continental Divide again.  Duh, guess we had to if we had crossed it once on our way out.  But then I noticed we were above tree line again.  And there was occasional lightning, thunder, hail, and constant rain.  And now we were going down.  Through rivers.  Through mudholes a foot deep.  Over loose "baby heads" as trail folks call the big loose rocks.  Around switchbacks.  And back into the treeline.

And that went on and on and on for what seemed like forever.  And finally we reached the groomed gravel road on the other side.  And soon pavement, and soon we were back in town.  FIVE HOURS AFTER WE STARTED.  Matt was more soaked than me as his gear isn't quite as rain-proof.  But the worst part might be this:


The dye from my black leather motorcycle gloves seems to have at least semi-permanently stained my hands.  I've tried soap and Gojo and they still look EXACTLY like that.  This stuff is NOT coming off, period.  It's quite horrible....I look like a coal miner!

I honestly and truly thought that the trip Matt and I took over Mosquito Pass was the most harrowing and crazy thing I might ever do on a street legal motorcycle.  Boy was I wrong!  This was like that, except with tons of water added.  And my hands were basically numb the entire time.  And you know, your hands are kind of important when you ride a motorcycle.  But I have to say, my BMW G650X is one capable motorcycle.  I might have been scared out of my gourd, but that bike just wouldn't slip or slide.  It simply handled it and handled it well.  I definitely learned I have much further limits than I thought when it comes to this kind of thing, but I would have been happy remaining ignorant to THOSE particular limits, let me tell you.

But I can't help but wonder how long my hands are going to be like this.  sigh
at 11:16 PM

Email ThisBlogThis!Share to TwitterShare to FacebookShare to Pinterest
Labels: leadville