That was one epic day.  It started with getting up at 4am so we could get to the head of the corral when it opened at 5am.  That went as planned, which was good as our corral was a full half the race and that meant there were probably around 1,000 people in it!  The race started promptly at 6:30am, and it was on!

Alan and I moved through traffic down the paved hill pretty well, but man did things stack up on the first gravel road and then even worse on the first climb.  But I settled in and did my thing and Alan set sail ahead of me and I didn't see him for a long while.  Everything was going quite as planned until I got about 15 miles in and was starting to climb the back side of the famous Powerline descent.  All the sudden my bike just started to lock up...I couldn't pedal!  I jumped off, flipped the bike over (which requires removing my GPS, which I accidentally STOPPED and didn't realize it until 13 minutes later, ugh!), and started diagnosing.  Turns out the nut that holds the cassette (the big cluster of gears on the back tire) had worked loose somehow.  I've ridden THOUSANDS of miles and this has only ever happened to me TWICE.  But still, that's something I should have checked and didn't, and it cost me.

I did not have the special tool you need to tighten that, so I made due and got it as tight as I could and took off after a few minutes, scared it was just going to happen again.  But I made it to the 27 mile aid station (Pipeline outbound), where I had been smart enough to leave a complete wheelset, with the world's most awesome crew, Matt Kimel.  We swapped to my backup rear wheel in a matter of seconds, restocked the fuel, and off I went.

Things went very well from there through the Twin Lakes outbound aid station and to the start of the Columbine Mine climb.  That's ten miles out and the climb is about 2,800 feet of elevation gain to 12,600 feet above sea level, which is well above tree line.  Let's just say that riding that after riding 40 more miles of the course did NOT go nearly as well as the training rides!  Wow, that was brutal.  I did see Alan coming down as I was still climbing, which was cool.  Somehow I missed my friend Tammy, who is a Pro and did very well today, too.  Kind of bummed about that, but I must have had my head down grinding pretty hard when she went by.  By the time I passed Alan I was up closer to the top and was walking the steep and very loose section, so I spotted him and wished him well.

Made it to the top, grabbed some Coke and a few banana pieces from the aid station, and headed back down.  Man, I must have passed 50 people on that descent!  Generally speaking, I rode the descents within my limits and fairly safely, but I still passed TONS of people on every one.  This race attracts a lot of people that really don't do much intense mountain biking, and my riding with my local group of buddies at crazy places like Pisgah National Forest has prepared me pretty well for going downhill pretty fast.  So that was fun.  It wasn't as fun watching those same people pass me back on the next climb, though.  I need to work on that!

Every climb after Columbine was pretty tough.  The legs just didn't have the power any more.  But they kept going (with some amount of walking here and there) and I slipped my time goals just a little at each station, but not too bad for the first 2/3 of the race.  It was that last third that hosed me!  But to be fair, there was a HUGE wind this afternoon that made a section of the course MUCH slower than it would have otherwise been, and was at a point where it just sapped energy like crazy.  It should have been a soft downhill to flat to soft uphill paved section that in a group would have been easily done at 18MPH or more.  But instead we were reduced to grinding more like 12MPH.  And it hurt.

Then comes the Powerline climb.  Let's just say I had to walk almost every inch of the uphill parts.  I felt like I could have ridden some of the easier parts between the steep climbs, but every time I tried I had the strangest cramps up my inner thighs.  I've never had those before, and it was like FIRE shooting up my legs.  It only happened when I tried to pedal and walking was fine, so I kept walking and hoped something good would happen, with little expectation that it actually would.

And around this time I was doing all this walking, I started running time calculations.  Oh crap, making the 12 hour time for the silver belt buckle award (and being recognized as a "finisher" at all) was looking quite unlikely.  Especially since there was still one long climb left to another descent, and then a three mile climb back into town for the finish.  I was really worried I couldn't pedal with any power due to the cramps, which meant climbing was going to be walking, and there was too much left.

But I took some more salt supplements, kept drinking fluids (water and my nutrition drink that also had electrolytes in it), and kept moving forward.  One thing I had in my favor was I had a fifteen minute descent for my legs to rest and get fluids before that next climb, and apparently that was enough.  I wasn't fast, but I was able to pedal at about twice the same speed I could have walked up that hill.  As I worked through the woods to that last descent, the math still didn't look good.  I was pretty positive for the last hour and a half that I'd never make it.  But thanks to all the support from all my friends and family and coaches and even random people from the Internet that I've never even met, I just knew that as long as my legs would pedal, I was going to keep going.  And I did.

And that descent was fast again, and there was a four mile stretch before that last climb that was probably a soft downhill, because I averaged around 20MPH for that stretch.  As I neared the end of that stretch to start the final climb, I realized I was going to make it with a few minutes to spare.  That was quite a feeling, but then my thoughts turned to my poor family, crew, and all of you following along at home.  I figured it was going to be nerve-wracking since you guys had no idea I was so close.  Sorry about that.  It wasn't much in my control after a certain point!

But I ground out that final climb, often times with power outputs that WERE very respectable (which was quite shocking to me!) and as I approached that red carpet, I couldn't help but start crying.  The amount of climbing in this race just does something to you.  You swear over and over that current climb will be over around the next bend, only to be presented with plenty more to go.  I like to make sure I know a race course ahead of time, and I really did know this course pretty well, but yet once you're racing and doing that to your body, it affects the mind as well.  So you end up back in that same space from time to time, and that kind of thing accumulates inside somehow.  Plus, I had all that time (probably an hour) when I was pretty sure I wouldn't make it.  Then to find I could, pretty much only 20 minutes from the end, meant a huge release when I finally crossed that line.  Here's a picture at the finish...more good pics to come as the various race picture folks have stuff online: 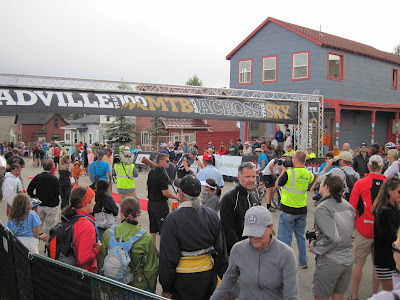 And here's where I owe a huge debt of gratitude to a lot of folks.  I've mentioned my family once, but I'll do it again...they've put up with a lot of me being gone to train for this.  Amazing support.  Then my coach, Sage Rountree, who made this possible.  Without her, there's just no way I could have done this on my own.  And then there's Tammy Sadle, who was my inspiration from the beginning.  She works at Training Peaks, the site my coach and I use for our main method of communication for workout planning.  She did this race for the first time last year, and they blogged about her effort to raise money for Team First Descents and she did great her first time out.  I followed her progress, but also made a small donation to her fund raising effort, which resulted in her being nice enough to reach out to me via social media.  Seeing how well she did made me want to try it, too.  Happy to say she's a friend now, too!

And then there was Alan Bocko.  Been friends with Alan for many years, but I was pretty sure if I signed up that he'd find a way.  And he did.  And then Matt Kimel, who was cool enough to sign on as our crew for the event, including spending several weeks here in Leadville keeping me company.  You've probably read about our motorcycle adventures already.  LOOK AT MY HANDS! And thanks to Matt's family for letting him do this.  That was a big deal for them, too.  Oh, and my Chapel Hill riding crew...riding with those guys is always fun and challenging.  That crew always has multiple people in it that kick my butt on any given day.  And Santa Cruz for making awesome bicycles!

And then there's all of you folks who donated or even just supported me online.  I owe you so many thanks.  I really didn't want to let you down, and I hope I did you proud.  I thought about every one of you at some point on this long day, I promise.  Thank you all so much for all the kind words of support.  It really means a lot to me.   More pictures and further wrap-up to come...I really should go to bed now.
at 1:33 AM

wow is right. amazing. what an accomplishment. nice work.