About a week ago I put an end to my professional racing for 2008 with the Mazda MX-5 Cup season finale at Laguna Seca, which is near Monterey, CA. I raced there for the first time back in 2007 in the same series, and really enjoyed the track. I enjoyed it enough that I'd really like to race there every year, so hopefully I can find another arrive-and-drive scenario for 2009.

For this trip I was able to talk Ashley into going with me. That wasn't hard since she had never been to California at all, and northern California has so much interesting stuff to offer. We got a

really nice room on the ocean at the Spindrift Inn right on Cannery Row in Monterey for the first couple nights. That was perfect as it let us walk around that entire area in the evening and in between my practice sessions. The Inn has awesome valet parking service, and was generally beautiful and awesome all the way around. The only negative was a lack of air conditioning, and it was hard to keep the room even 72F, and I generally like it cooler than that to sleep. I finally asked for a fan, though, and that got it really good at night. We were about 15 feet from the ocean at high tide and it was awesome sleeping with the waves breaking right outside.

We ate at several random places in Monterey that were all pretty good, but the best food in that area was definitely our Fr

iday night dinner at the Chart House. Very good place and highly recommended if you're in the area. We checked out of there on Saturday after qualifying and headed to Santa Cruz. That afternoon we did a really fun train ride up into one of the virgin redwood forests still left. The cars were all open top gondolas and it was a real steam engine. Another highly recommended stop!

After that we met Jane and Colleen at their friend Judi's house on the beach in Santa Cruz. Judi was gracious enough to let us stay in their house there that night, so we went out and had another great meal at Aqua Bleu in downtown Santa Cruz. I got up Sunday and headed back to the track for the race. Ashley and Colleen and Jane came in time to see the entire race, and Hilary and Scott met us all there to see it, too. It was way cool having real fans in the stands for a big race! I even got to wave to them from the race car as we gridded up on the front straight before the pace lap. Afterwards they got to come to the pits and get some pictures with me and the car.

After that Ashley and I drove on up to San Francisco to check into The Argonaut, our hotel right on Fisherman's Wharf (thanks to Scott for that recommendation!). We got in late enoug

h and were tired, so we had room service. This is one very cool hotel that even had good room service! Another highly recommended spot! Their valet parking is a little slower (probably just have further to go to get the cars!), so plan accordingly. On Monday we got up and headed to Muir Woods, which was way cool. It's another big virgin redwood forest with a very nice set of trails through it. We met Jane, Colleen, and Colleen's daugher Hannah there and headed up to Mt. Tamalpais. This is the tallest peak with a view of San Francisco and the bay, and it's awesome! Highly recommended. 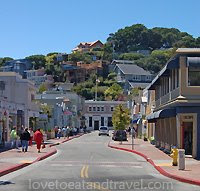 After that we all headed down into Tiburon (a small town on the bay) and ate lunch at Sam's Cafe. Good food and good times sitting out by the marina. Tiburon is a very cool little town to visit, and I was awed by the houses on the cliffs over the bay. Wow. Then Ashley and I headed to Headlands Park, which is probably the best place to view the Golden Gate bridge. It's got the added charm of the WWII facilities that were built and then never actually used as they weren't completed until it was apparent that no enemy ships would ever make it to the west coast. From there we headed back into San Francisco and met Hilary at her and Scott's new apartment and then on to dinner. This time it was Betelnut restaurant, and this was definitely the best food we had on the entire trip. Amazing asian fare and highly recommended when in SF.

We flew home the next day after I was able to finally get my In-N-Out burger on the way to the airport (the most important food stop in any west coast trip!). Okay, my first hot In-N-O

ut burger. Some people might be here for a race report, but the trip was so much more than just racing I decided to just skip that. Okay, I won't skip it. I'll summarize. I was mid pack for most of practice and qualifying. Had a good race from 19th in qualifying (out of 29) to finish 12th on track. But a flurry of post race protests bubbled me up to tenth before I was caught in one myself (which most sadly cost me my FIRST hot In-N-Out as my wife and friends headed there and I got stuck being interviewed and all that for the protests) and penalized back to 13th. The short version is I'd do it all the same again, and if I had been the guy that protested me I would have chalked it up to "one of them racing deals" and not thought about it again. Same thing has happened to me several times, in fact. But such is life, and I had a great time on my trip. Ashley and I found some really great stuff to do when we take the kids to visit Hilary and Scott next year, too!
at 7:37 PM

What am I, chopped liver?

I have also been your (lonely) fan at a faraway race!

I said it was nice having "fans." That's plural. That's the new part. :-) I'd never call you chopped liver!