In this one, I was the windshield. I got really lucky in the Laguna race that this tire still held air fine after the wheel damage. 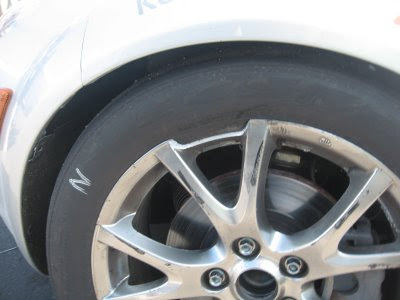 That happened with about 15 minutes to go in the race. It wasn't due to contact with any other cars, it was simply due to running over the new "turtles" that they've installed at Laguna inside of the normal rumble strips to keep people from short-cutting the turns in the gravel (which can be faster). The particular turtle I hit was in turn six, one of the fastest and most dangerous corners on the course. It actually sent the car up on the other two wheels a little and was quite an interesting ride. I was sure that I had done some damage and that it would result in a flat tire, but I felt it out for a little over a lap and it was fine, so I just kept motoring. You can't see in the picture, but the sidewall of the tire is actually bulged out a little where the rim edge is missing, too. Lucky, indeed.
at 9:38 PM

Email ThisBlogThis!Share to TwitterShare to FacebookShare to Pinterest
Labels: racing

Wow, that is a great blog entry title. Seriously, very creative. Some people would have titled it "I'd rather be lucky than good".