Allow self defense in schools! 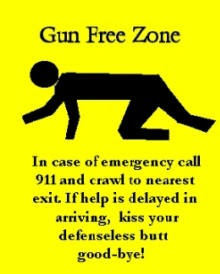 I've always thought it was crazy that students are not allowed to legally carry firearms on campus, especially when so many people have to call campus home.  Now there's more of a movement in this area, and this website is there to help it. Good for those who created it, and hopefully we can spread the word further.
It saddens me when members of the law enforcement community, like the NC State Public Safety Chief Tom Younce are against this with non-existent arguments.  You can see his argument and more on the topic here in Raleigh on WRAL.com.  This blog entry also says things quite eloquently and I agree 100%.  I can't find the source, but I heard that at the time of the Virginia Tech shootings that there were over 100 firearms checked at the front gate by the VT public safety department in accordance with their current policy on weapons on campus.
It should be noted that what people are asking for is actually NOT a free-for-all where guns are legal on campus.  They are actually asking for concealed carry ONLY be allowed.  In most states, including NC, you can not get a concealed carry permit without going through a class, background check, and being fingerprinted.  This is not the kind of thing criminals do, this is what law-abiding citizens do.  Criminals will bring guns on campus anyway and law-abiding citizens should be allowed to defend themselves in the United States of America.
at 6:33 PM

I couldn't agree with you more. I have not gotten my concealed carry permit yet but I plan to soon. I just went through the antiquated pain in the ass system NC still has to purchase a pistol. It is totally unnessisary with the instant background check required by federal law. I had to get the 4 different things notorized to apply. I turned it in two weeks ago and still don't have it back. If I wanted I could just go across the street from work and have an illegal gun in 15 minutes. So much for our rights in NC. I won't even go into what may happen to our second amendment rights with the new President and congress.