Okay, I'm finally getting around to what I did last weekend. Yeah, took me a week. Sorry about that.

Anyway, as some of you know, I'm a member of the Palmetto Motorsports Club. This is the resident club at Carolina Motorsports Park, a race track less than an hour south of Charlotte, NC. The track is managed by a team made up of Brian Smith and Jochen Tartak. Brian is a long time professional race car driver in series like World Challenge, Grand Am, and Mustang Challenge. Both are highly experienced driving instructors, too. As a service for the club members, they decided to see if there was interest in a car control school in the snow. Brian used to work for Michelin doing tire testing and in doing so did a lot of winter testing at the Keweenaw Research Center in Houghton, MI. That's the upper peninsula of Michigan where this time of year it's cold and incredibly snowy!

Here's a bad video of some of what we did.

The weekend started by first flying into Houghton. They do have a public airport there with one gate, one ticket counter, and one rental car counter. There are two flights per day in and out via Minneapolis, and Northwest does fly direct to Minneapolis from RDU, which is nice. So while it's a pretty remote area, I could still fly there on one stop. I couldn't get home quickly in one stop (though it was possible), so I came via Minneapolis and Atlanta to get home in a reasonable time. The first flight out of Hougton on Monday and the last flight in on Friday are in a small jet. Everything else (including my flight in) is a small turboprop. And while they do obviously plow the runway, you're still landing on ice and snow! It's quite the different world than what I'm used to!

Brian then took me on a tour of the town and the test facility where we'd be driving. The town looks to be the home of Michigan Tech and not much else. It is a nice sized small town with some very good restaurants and very friendly people. We started the school early Saturday morning with some quick classroom stuff and then went out on to the big "snowpack" area, which is really just a nicely groomed large field of packed snow. We did some acceleration and braking exercises to just get used to getting cars moving and then bringing them back to a stop with almost zero grip. Then we added in some minor maneuvering. After lunch we then went to the really hard stuff, drifting. I now have a much larger respect for the sport of drifting. While most racers are fairly good at catching a "loose" car (oversteer, where the rear of the car steps out) and that sometimes involves sliding it on around, there' s a big difference between that and doing it on purpose and maintaining those large slip angles while keeping the car under control.

We practiced this using an "hourglass" configuration. You drift around one end of the hourglass and then you pendulum back in the middle and then drift ar 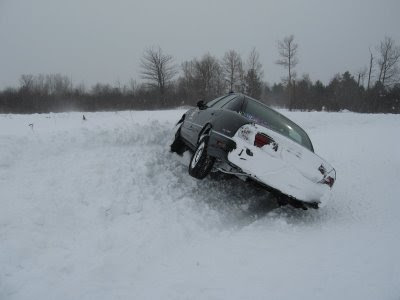 ound the other end. Rinse, repeat. Sounds easy, but it's really hard to get the hang of. You're really steering the entire thing using the throttle and not the steering wheel. I got kind of frustrated at the first stab at it, but I was getting pretty tired, too. We did it again the next morning and it went a LOT better for me, even though there was less grip. After that we hit the road course for some fun. We didn't use timers, but we did work a lot on both driving it tidy and fast as well as drifting around everywhere. The car on the snowbank is a picture of what can happen if you try to do things a little too fast.

That was something that happened to just about everyone, though. It didn't take much of a slip-up to do that, unfortunately. Brian said normally the snow is much softer and just sucks you in flat, but we were ramping up on it since it was a little firmer. But don't think it was "hard" in any way...we never did any significant damage to anything on the cars.

So what did we learn? Basically we just fine tuned our abilities to anticipate ill handling conditions and correct them quicker and more efficiently. That should lead to better rain racing as well as even better racing in the dry in some conditions. And it was a heck of a lot of fun. The amount of actual seat time was very high, and when you weren't driving you were riding with someone else who was, so you got to learn by observation, too. Great stuff. Many thanks to Brian and Jochen for all their hard work.

As an aside, on Saturday night we also went snowmobiling. I had never done that before, and it was a blast. We went 42 miles b 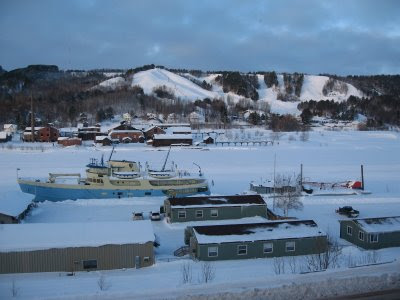 efore supper on some really great trails through the woods, along roads, and over frozen lakes. Then we had a few drinks and a big meal and had to return the snowmobiles to the rental place. So on the way we went drag racing on the frozen canal by our hotel. Hmm, couple drinks and 85-90MPH speeds on a vehicle I had never experienced before that day. Not sure that was terribly smart, but it seemed to work out okay. On Sunday night we had a great meal in downtown Houghton while watching the Superbowl. Great times.

Weather? Ah, it was balmy. It was in the teens most of the time, snowing, and windy as heck! But it was all worth it, and I hope to do it again next year! In fact, I think Superbowl weekend might have been the perfect time.
at 3:43 PM