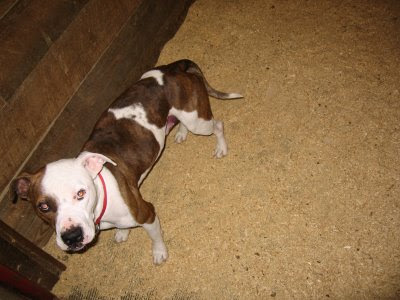 My fence fixes appear to be enough, at least so far. He made it through his first night in the kennel with Jasper and Sandi. He appears to really like the dog house as even during a warm day you'll find him in it (it has several light bulbs for heat). I think he really likes his blankets, which I had thrown in there. They seem to be arranged a little different than they were, though he hasn't pulled them out, which I find kind of cool.

He's still pretty rambunctious when you go in to see the dogs or feed them. Ash said he was jumping up and mouthing her arm (not biting, just being annoying with his mouth) while she was trying to feed them this morning. And I wen to see them tonight and he was a little on the obnoxious side trying to get attention. But he's young...he'll get it. At least he has a big place to run now along with a warm place to sleep at night! Seems happy. The other two seem a little perturbed still, but they'll warm up to him.
at 7:33 PM