Depression and the Pinewood Derby 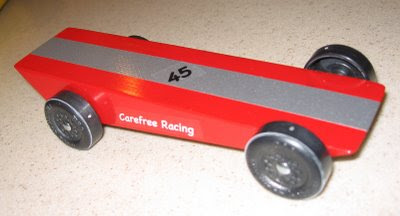 Seems we had a major setback. Unfortunately I'm out of town this weekend, and it's Pinewood Derby weekend. I read the build instructions that came with the car and assumed they were pretty much the "rules" since they list things like sizes, maximum weight, etc. I don't recall it saying that you HAD to have the axles visible through slots in the bottom of the car, though the build instructions have you using those slots for your axles.

I found our slots weren't square, however, and squaring them properly made them too big. Which to me was fine since I didn't like slots anyway. So Kevin and I used the mill to drill holes and used that instead. So now I'm gone and the tech inspector said he couldn't run it that way...apparently last year they had a car that didn't have the slots that won their competition and then got disqualified when he went to the regional competition. So now they require the slots, too.

What sucks about this? Well, it's not easy to do, but if I had been home this weekend (instead I'm on a trip that was planned long before I knew about the Pinewood Derby being this weekend) I could have fixed it. It would have meant removing the axles and wheels and cutting tiny slots so you could see the axles. Then reassemble. But it's not trivial to do and so Ashley can't make it happen without me. Which really bums me out. A lot. If we had just used the non-square slots the car would have been slower, but he would have gotten to compete. I have no idea if they'll let him go ahead and run it at least some, but it sounded like they might. But I'm not there and I could have fixed it if I were. sigh Sorry, Kevin.
at 10:54 PM

oh, man...that is too bad!!! Matt and Tanner had a lot of fun making his PWD car so very long ago (ok, so like, two years). They are pretty strict on the way you make them. We didn't get far in the actual races, but Tanner won Best Design!

that seems like a job for murch. or lis :)

we would have helped!!