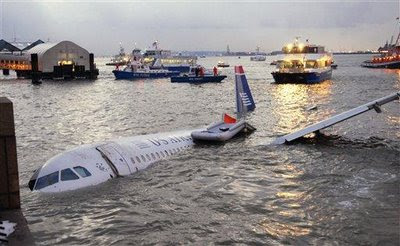 So I'm thinking about the plane crash yesterday (guess why!) and it occurs to me that yes we should praise the pilot and yes, it's okay to call him a hero, he's really not a HUGE hero or anything. He did what he, and every pilot like him, is trained to do. Sure, he did it well, too. Could he have done it better? We actually don't know that. Seems unlikely, but we don't KNOW that yet. Might not ever. But everyone on-board will be fine, which is a great thing.

Anyway, later I'm checking Facebook and my friend, Mr. Blizzard, posts a link to an article on the topic. He is a pilot and said it all so much better than me. Which I'm sure shocks you all. So yeah, let's praise the guy. A key to the city of New York? By all means! But I don't think we need to be naming any monuments after him or anything. Why even mention it? Because I'm GLAD what he did probably wasn't so terribly special. That means I have a good chance of surviving the same kind of thing, should I be so unlucky.
at 10:09 PM

check this out, I think he agrees with you:

Oh goodness...his first real interview will be with Katie Couric. *sigh* Readers of this blog know how I feel about THAT.